New Who Girl Is Ace! 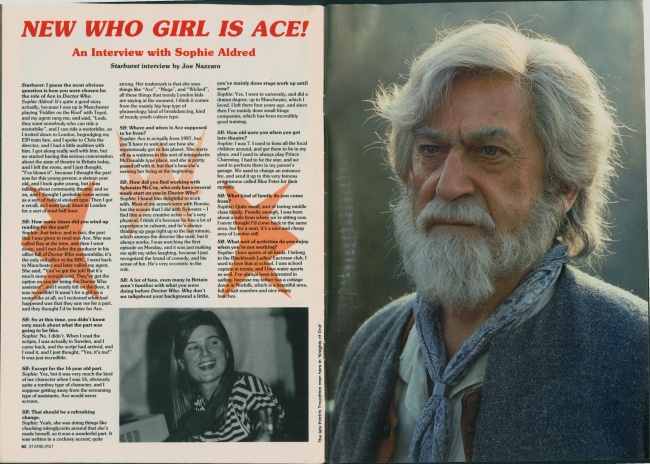 Starburst: I guess the most obvious question is how you were chosen for the role of Ace in Doctor Who.

Sophie Aldred: It's quite a good story actually, because I was up in Manchester playing 'Fiddler on the Roof' with Topol, and my agent rang me, and said, "Look, they want somebody who can ride a motorbike", and I can ride a motorbike, so I trotted down to London, begrudging my on train fare, and I spoke to Chris the director, and I had a little audition with him. I got along really well with him, but we started having this serious conversation about the state of theatre in Britain today, and I left the room, and I just thought, "I've blown it", because I thought the part was for this young person; a sixteen year old, and I look quite young, but I was talking about community theatre, and so on, and I thought I probably came across as a sort of radical student type. Then I got a recall, so I went back down to London for a sort of mad half hour.

SB: How many times did you wind up reading for the part?

Sophie: Just twice, and in fact, the part that I was given to read was Ace. She was called Ray at the time, and then I went down, and I met John the producer in his office full of Doctor Who memorabilia; it's the only red office in the BBC. I went back to Manchester and later called my agent. She said, "You've got the job! But it's much more complicated. They've got the option on you for being the Doctor Who assistant", and I nearly fell on the floor, it was incredible! It wasn't for a girl on a motorbike at all, so I reckoned what had happened was that they saw me for a part, and they thought I'd be better for Ace.

SB: So at this time, you didn't know very much about what the part was going to be like.

Sophie: No, I didn't. When I read the scripts, I was actually in Sweden, and I came back, and the script had arrived, and I read it, and I just thought, "Yes, it's me!" It was just incredible.

SB: Except for the 16 year old part. Sophie: Yes, but it was very much the kind of me character when I was 16, obviously quite a tomboy type of character, and I suppose getting away from the screaming type of assistants. Ace would never scream.

SB: That should be a refreshing change.

Sophie: Yeah, she was doing things like chucking nitroglycerin around that she's made herself, so it was a wonderful part. It was written in a cockney accent; quite strong. Her trademark is that she says things like "Ace", "Mega", and "Wicked", all these things that trendy London kids are saying at the moment. I think it comes from the mainly hip hop type of phraseology; kind of breakdancing, kind of trendy youth culture type.

SB: Where and when is Ace supposed to be from?

Sophie: Ace is actually from 1987, but you'll have to wait and see how she mysteriously got to this planet. She starts off as a waitress in this sort of intergalactic McDonalds type place, and she is pretty pissed off with it, but that's how she's earning her living at the beginning.

SB: How did you find working with Sylvester McCoy, who only has a several week start on you in Doctor Who? Sophie: I found him delightful to work with. Most of my scenes were with Bonnie, but the scenes that I did with Sylvester — I find him a very creative actor — he's very physical. I think it's because he has a lot of experience in cabaret, and he's always thinking up gags right up to the last minute, which annoys the director like mad, but it always works. I was watching the first episode on Monday, and it was just making me split my sides laughing, because I just recognized the brand of comedy, and his sense of fun. He's very eccentric in the role.

SB: A lot of fans, even many in Britain aren't familiar with what you were doing before Doctor Who. Why don't we talk about your background a little, you've mainly done stage work up until now?

Sophie: Yes. I went to university, and did a drama degree, up in Manchester, which I loved. I left there four years ago, and since then I've mainly done small fringe companies, which has been incredibly good training.

SB: How old were you when you got into theatre?

Sophie: I was 7. I used to boss all the local children around, and get them to be in my plays, and I used to always play Prince Charming. I had to be the star, and we used to perform them in my parent's garage. We used to charge an entrance fee, and send it up to this very famous programme called Blue Peter for their appeals.

SB: What kind of family do you come from?

Sophie: Quite small, sort of boring middle class family. Funnily enough, I was born about a mile from where we're sitting now. I never thought I'd come back to the same area, but for a start, it's a nice and cheap area of London still.

SB: What sort of activities do you enjoy when you're not working?

Sophie: I love sports of all kinds. I belong to the Blackheath Ladies' Lacrosse club, I used to love that at school. I was school captain in tennis, and I love water sports as well. I've always been interested in sailing, because my father has a cottage down in Norfolk, which is a beautiful area, full of salt marshes and nice empty beaches.