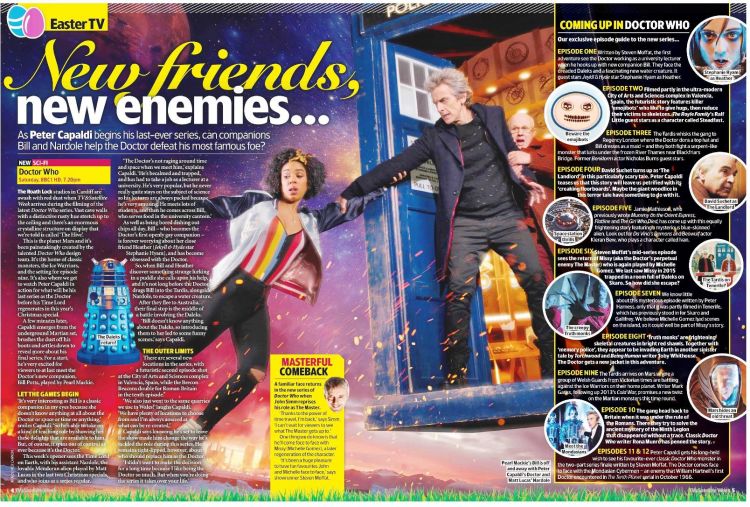 As Peter Capaldi begins his last-ever series, can companions Bill and Nardole help the Doctor defeat his most famous foe?

The Roath Lock studios in Cardiff are awash with red dust when TV&Satellite Week arrives during the filming of the latest Doctor Who series. Vast cave walls with a distinctive rusty hue stretch up to the ceiling and there's an enormous crystalline structure on display that we're told is called 'The Hive'.

This is the planet Mars and it's been painstakingly created by the talented Doctor Who design team. It's the home of classic monsters, the Ice Warriors, and the setting for episode nine. It's also where we get to watch Peter Capaldi in action for what will be his last series as the Doctor before his Time Lord regenerates in this year's Christmas special.

A few minutes later, Capaldi emerges from the underground Martian set, brushes the dust off his boots and settles down to reveal more about his final series. For a start, he's very excited for viewers to at last meet the Doctor's new companion, Bill Potts, played by Pearl Mackie.

'It's very interesting as Bill is a classic companion in my eyes because she doesn't know anything at all about the Doctor or space or time or anything,' smiles Capaldi. 'So he's able to take on a kind of teaching role by showing her if these delights that are available to him. But, of course, it spins out of control as ever because it's the Doctor.'

This week's opener sees the Time Lord on Earth, with his assistant Nardole, the lovable Mendoran alien played by Matt Lucas in the last two Christmas specials, and who joins as a series regular.

'The Doctor's not raging around time and space when we meet him; explains Capaldi. 'He's becalmed and trapped, and has had to take a job as a lecturer at a university. He's very popular, but he never really quite stays on the subject of science so his lectures are always packed because he's very amusing. He meets lots of students, and then he comes across Bill, who serves food in the university canteen.'

As well as being bored dishing out chips all day, Bill — who becomes the Doctor's first openly gay companion — is forever worrying about her close friend Heather (Jekyll & Hyde star Stephanie Hyam), and has become obsessed with the Doctor.

So, when Bill and Heather discover something strange lurking in a puddle she calls upon his help, and it's not long before the Doctor drags Bill into the Tardis, alongside Nardole, to escape a water creature.

After they flee to Australia, their final stop is the middle of a battle involving the Daleks. 'Bill doesn't know anything 41 about the Daleks, so introducing them to her led to some funny scenes; says Capaldi.

There are several new locations in the series, with a futuristic second episode shot at the City of Arts and Sciences complex in Valencia, Spain, while the Brecon. Beacons double for Roman Britain in the tenth episode.

'We also just went to the same quarries we use in Wales!' laughs Capaldi. 'We have plenty of locations to choose from and I'm always amazed at what can be re-created.'

Capaldi says knowing he's set to leave the show made him change the way he's tackled the role during this series. He remains tight-lipped, however, about who should replace him as the Doctor.

'I didn't want to make the decision for a long time because I like being the Doctor so much. But when you're doing the series it takes over your life.'

A familiar face returns in the new series of Doctor Who when John Simm reprises his role as The Master.

'Thanks to the power of time travel, I'm back,' says Simm. 'I can't wait for viewers to see what The Master gets up to.'

One thing we do know is that he'll come face to face with Missy (Michelle Gomez), a later regeneration of the character.

'It's been a huge pleasure to have fan favourites John and Michelle face to face,' says showrunner Steven Moffat.

COMING UP IN DOCTOR WHO

Our exclusive episode guide to the new series...

EPISODE ONE Written by Steven Moffat, the first adventure see the Doctor working as a university lecturer when he hooks up with new companion Bill. They face the dreaded Daleks and a fascinating new water creature. It guest stars Jeykll 6-Hyde star Stephanie Hyam as Heather.

EPISODE TWO Filmed partly in the ultra-modern City of Arts and Sciences complex in Valencia, Spain, the futuristic story features killer 'emojibots' who like to give hugs, then reduce their victims to skeletons. The Boyle Family's Ralf Little guest stars as a character called Steadfast.

EPISODE THREE The Tardis whisks the gang to Regency London where the Doctor dons a top hat and Bill dresses as a maid - and they both fight a serpent-like monster that lurks under the frozen River Thames near Blackfriars Bridge. Former Benidorm actor Nicholas Burns guest stars.

EPISODE FOUR David Suchet turns up as 'The Landlord' in this particularly scary tale. Peter Capaldi teases us that this story will leave us petrified with its 'creaking floorboards'. Maybe the giant woodlice in this terror tale have something to do with it.

EPISODE FIVE Jamie Mathieson, who previously wrote Mummy on the Orient Express, Flatline and The Girl Who Died, has come up with this equally frightening story featuring a mysterious blue-skinned alien. Look out for Da Vinci's Demons and Beowulf actor Kieran Bew, who plays a character called Ivan.

EPISODE SIX Steven Moffat's mid-series episode sees the return of Missy (aka the Doctor's perpetual enemy The Master) who is again played by Michelle Gomez. We last saw Missy in 2015 trapped in a room full of Daleks on Skaro. So how did she escape?

EPISODE SEVEN We know little about this mysterious episode written by Peter Harness, only that it was partly filmed in Tenerife, which has previously stood in for Skaro and Gallifrey. We believe Michelle Gomez had scenes on the island, so it could well be part of Missy's story.

EPISODE EIGHT 'Truth monks' are frightening skeletal creatures in bright red shawls. Together with 'memory police', they appear to be invading Earth in another sinister tale by Torchwood and Being Human writer Toby Whithouse. The Doctor gets a new jacket in this adventure.

EPISODE NINE The Tardis arrives on Mars where a group of Welsh Guards from Victorian times are battling against the Ice Warriors on their home planet. Writer Mark Gatiss, following up 2013's Cold War, promises a new twist on the Martian monsters this time round.

EPISODE 10 The gang head back to Britain when it was under the rule of the Romans. There they try to solve the ancient mystery of the Ninth Legion that disappeared without a trace. Classic Doctor Who writer Rona Munro has penned the story.

EPISODES 11 & 12 Peter Capaldi gets his long-held wish to see his favourite-ever classic Doctor Who monster in the two-part series finale written by Steven Moffat. The Doctor comes face to face with the Mondasian Cybermen - an enemy that William Hartnell's first Doctor encountered in The Tenth Planet serial in October 1966.