New ray of hope for 'Dr. Who' fans 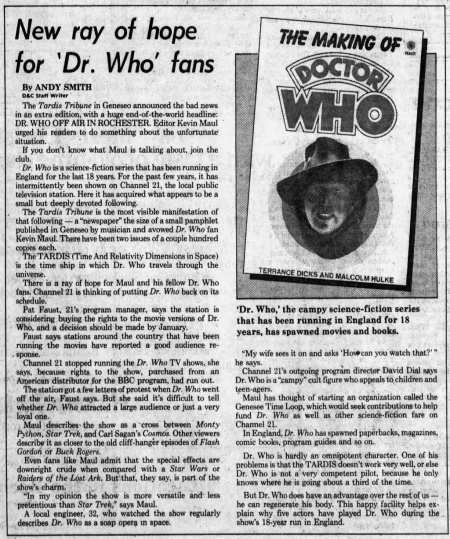 The Tardis Tribune in Geneseo announced the bad news in an extra edition, with a huge end-of-the-world headline: DR. WHO OFF AIR IN ROCHESTER. Editor Kevin Maul urged his readers to do something about the unfortunate situation.

If you don't know what Maul is talking about, join the club.

Dr. Who is a science-fiction series that has been running in England for the last 18 years. For the past few years, it has intermittently been shown on Channel 21, the local public television station. Here it has acquired what appears to be a small but deeply devoted following.

The Tardis Tribune is the most visible manifestation of that following — a "newspaper" the size of a small pamphlet published in Geneseo by musician and avowed Dr. Who fan Kevin Maul. There have been two issues of a couple hundred copies each.

The TARDIS (Time And Relativity Dimensions in Space) is the time ship in which Dr. Who travels through the universe.

There is a ray of hope for Maul and his fellow Dr. Who fans. Channel 21 is thinking of putting Dr. Who back on its schedule.

Pat Faust, 21's program manager, says the station is considering buying the rights to the movie versions of Dr. Who, and a decision should be made by January.

Faust says stations around the country that have been running the movies have reported a good audience response.

Channel 21 stopped running the Dr. Who TV shows, she says, because rights to the show, purchased from an American distributor for the BBC program, had run out.

The station got a few letters of protest when Dr. Who went off the air, Faust says. But she said it's difficult to tell whether Dr. Who attracted a large audience or just a very loyal one.

Maul describes, the show as a cross between Monty Python, Star Trek, and Carl Sagan's Cosmos. Other viewers describe it as closer to the old cliff-hanger episodes of Flash Gordon or Buck Rogers.

Even fans like Maul admit that the special effects are downright crude when compared with a Star Wars or Raiders of the Lost Ark. But that, they say, is part of the show's charm.

"In my opinion the show is more versatile and less pretentious than Star Trek," says Maul.

A local engineer, 32, who watched the show regularly describes Dr. Who as a soap opera in space.

"My wife sees it on and asks 'How can you watch that"' he says.

Maul has thought of starting an organization called the Genesee Time Loop, which would seek contributions to help fund Dr. Who as well as other science-fiction fare on Channel 21.

In England, Dr. Who has spawned paperbacks, magazines, comic books, program guides and so on.

Dr. Who is hardly an omnipotent character. One of his problems is that the TARDIS doesn't work very well, or else Dr. Who is not a very competent pilot, because he only knows where he is going about a third of the time.

But Dr. Who does have an advantage over the rest of us — he can regenerate his body. This happy facility helps explain why five actors have played Dr. Who during the show's 18-year run in England.

Caption: Dr. Who, the campy science-fiction series that has been running in England for 18 years, has spawned movies and books.