New season brings a new companion to 'Doctor Who' 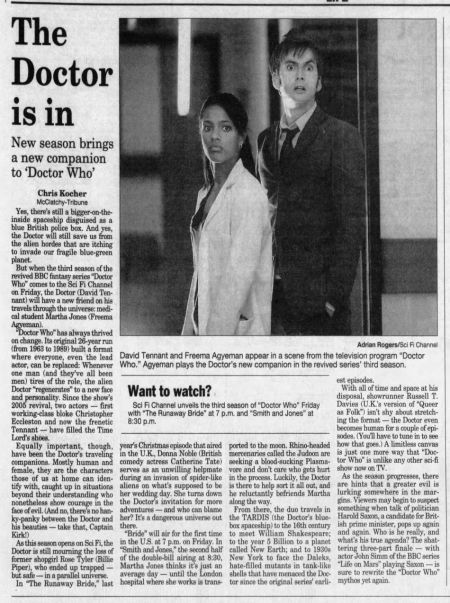 Yes, there's still a bigger-on-the-inside spaceship disguised as a blue British police box. And yes, the Doctor will still save us from the alien hordes that are itching to invade our fragile blue-green planet.

But when the third season of the revived BBC fantasy series "Doctor Who" comes to the Sci Fi Channel on Friday, the Doctor (David Tennant) will have a new friend on his travels through the universe: medical student Martha Jones (Freema Agyeman).

"Doctor Who" has always thrived on change. Its original 26-year run (from 1963 to 1989) built a format where everyone, even the lead actor, can be replaced: Whenever one man (and they've all been men) tires of the role, the alien Doctor "regenerates" to a new face and personality. Since the show's 2005 revival, two actors — first working-class bloke Christopher Eccleston and now the frenetic Tennant — have filled the Time Lord's shoes.

Equally important, though, have been the Doctor's traveling companions. Mostly human and female, they are the characters those of us at home can identify with, caught up in situations beyond their understanding who nonetheless show courage in the face of evil. (And no, there's no hanky-panky between the Doctor and his beauties — take that, Captain Kirk!)

As this season opens on Sci Fi, the Doctor is still mourning the loss of former shopgirl Rose Tyler (Billie Piper), who ended up trapped —but safe — in a parallel universe. In "The Runaway Bride," last year's Christmas episode that aired in the U.K, Donna Noble (British comedy actress Catherine Tate) serves as an unwilling helpmate during an invasion of spider-like aliens on what's supposed to be her wedding day. She turns down the Doctor's invitation for more adventures — and who can blame her? It's a dangerous universe out there.

"Bride" will air for the first time in the U.S. at 7 p.m. on Friday. In "Smith and Jones," the second half of the double-bill airing at 8:30, Martha Jones thinks it's just an average day — until the London hospital where she works is trans ported to the moon. Rhino-headed mercenaries called the Judoon are seeking a blood-sucking Plasma-yore and don't care who gets hurt in the process. Luckily, the Doctor is there to help sort it all out, and he reluctantly befriends Martha along the way.

From there, the duo travels in the TARDIS (the Doctor's blue-box spaceship) to the 16th century to meet William Shakespeare; to the year 5 Billion to a planet called New Earth; and to 1930s New York to face the Daleks, hate-filled mutants in tank-like shells that have menaced the Doctor since the original series' earliest episodes.

With all of time and space at his disposal, showrunner Russell T. Davies (U.K.'s version of "Queer as Folk") isn't shy about stretching the format — the Doctor even becomes human for a couple of episodes. (You'll have to tune in to see how that goes.) A limitless canvas is just one more way that "Doctor Who is unlike any other sci-fi show now on TV.

As the season progresses, there are hints that a greater evil is lurking somewhere in the margins. Viewers may begin to suspect something when talk of politician Harold Saxon, a candidate for British prime minister, pops up again and again. Who is he really, and what's his true agenda? The shattering three-part finale — with actor John Simm of the BBC series "Life on Mars" playing Saxon — is sure to rewrite the "Doctor Who" mythos yet again.

Sci Fi Channel unveils the third season of "Doctor Who" Friday with "The Runaway Bride" at 7 p.m. and "Smith and Jones" at 8:30 p.m.

Caption: David Tennant and Freema Agyeman appear in a scene from the television program "Doctor Who." Agyeman plays the Doctor's new companion in the revived series' third season.