New season of Doctor Who fun and refreshing 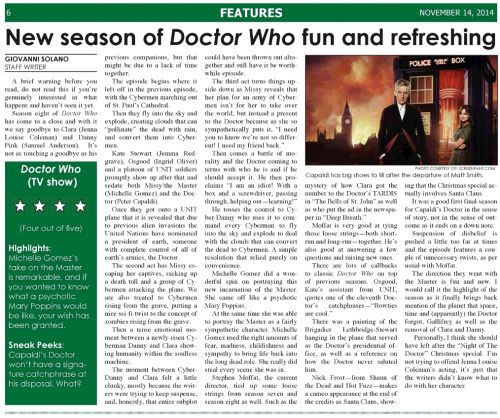 A brief warning before you read, do not read this if you're genuinely interested in what happens and haven't seen it yet.

Season eight of Doctor Who has come to a close and with it we say goodbye to Clara (Jenna Louise Coleman) and Danny Pink (Samuel Anderson). It's not as touching a goodbye as his previous companions, but that might be due to a lack of time together.

The episode begins where it left off in the previous episode, with the Cybermen marching out of St. Paul's Cathedral.

Then they fly into the sky and explode, creating clouds that can "pollinate the dead with rain, and convert them into Cyber-men.

Kate Stewart (Jemma Red-grave), Osgood (Ingrid Oliver) and a platoon of UNIT soldiers promptly show up after that and sedate both Missy/the Master (Michelle Gomez) and the Doctor (Peter Capaldi).

Once they got onto a UNIT plane that it is revealed that due to previous alien invasions the United Nations have nominated a president of earth, someone with complete control of all of earth's armies, the Doctor.

Then a tense emotional moment between a newly-risen Cyberman Danny and Clara showing humanity within the soulless machine.

The moment between Cyber-Danny and Clara felt a little clunky, mostly because the writers were trying to keep suspense, and, honestly, that entire subplot could have been thrown out altogether and still have it be worthwhile episode.

The third act turns things upside down as Missy reveals that her plan for an army of Cyber-men isn't for her to take over the world, but instead a present to the Doctor because as she so sympathetically puts it, "I need you to know were not so different! I need my friend back."

Then comes a battle of morality and the Doctor coining to terms with who he is and if he should accept it. He then proclaims "I am an idiot! With a box and a screwdriver, passing through, helping out—learning!"

He tosses the control to Cyber-Danny who uses it to command every Cyberman to fly into the sky and explode to deal with the clouds that can convert the dead to Cybermen. A simple resolution that relied purely on convenience.

Michelle Gomez did a wonderful spin on portraying this new incarnation of the Master. She came off like a psychotic Mary Poppins.

At the same time she was able to portray the Master as a fairly sympathetic character. Michelle Gomez used the right amounts of fear, madness, childishness and sympathy to bring life back into the long dead role. She really did steal every scene she was in.

Stephen Moffat, the current director, tied up some loose strings from season seven and season eight as well. Such as the mystery of how Clara got the number to the Doctor's TARDIS in "The Bells of St. John" as well as who put the ad in the newspaper in "Deep Breath."

Moffat is very good at tying those loose strings—both short-run and long-run—together. He's also good at answering a few questions and raising new ones.

There are lots of callbacks to classic Doctor Who on top of previous seasons. Osgood, Kates assistant from UNIT, quotes one of the eleventh Doctor's catchphrases —"Bowties are cool."

There was a painting of the Brigadier Lethbridge-Stewart hanging in the plane that served as the Doctor's presidential office, as well as a reference on how the Doctor never saluted him.

Nick Frost—from Shaun of the Dead and Hot Fuzz—makes a cameo appearance at the end of the credits as Santa Claus, showing that the Christmas special actually involves Santa Claus.

Suspension of disbelief is pushed a little too far at times and the episode features a couple of unnecessary twists, as per usual with Moffat.

The direction they went with the Master is fun and new. I would call it the highlight of the season as it finally brings back mention of the planet that space, time and (apparently) the Doctor forgot, Gallifrey as well as the removal of Clara and Danny.

Personally, I think she should have left after the "Night of The Doctor" Christmas special. I'm not trying to offend Jenna Louise Coleman's acting, it's just that the writers didn't know what to do with her character.

Caption: Capaldi has big shoes to fill after the departure of Matt Smith.

(Four out of five)

Michelle Gomez's take on the Master is remarkable, and if you wanted to know what a psychotic Mary Poppins would be like, your wish has been granted.

Sneak Peeks: Capaldi's Doctor won't have a signature catchphrase at his disposal. What?