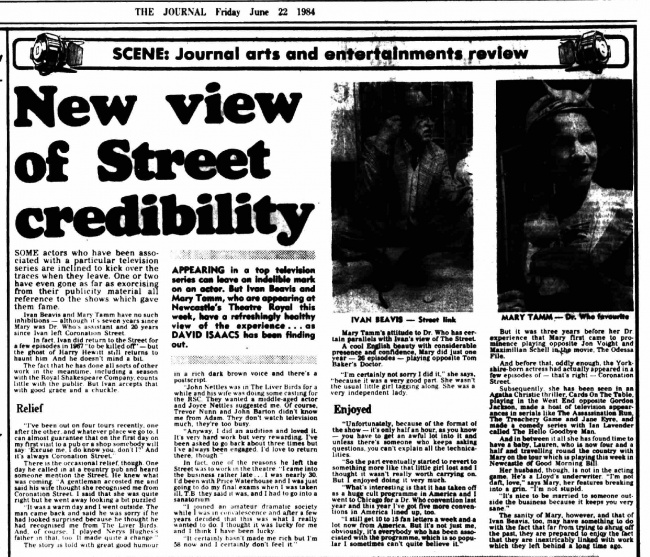 APPEARING in a top television series can leave an indelible mark on an actor. But Ivan Beavis and Mary Tamm, who are appearing at Newcastle's Theatre Royal this week, have a refreshingly healthy view of the experience ... as DAVID ISAACS has been finding out.

SOME actors who have been associated with a particular television series are inclined to kick over the traces when they leave. One or two have even gone as far as exorcising from their publicity material all reference to the shows which gave them fame.

Ivan Beavis and Mary Tamm have no such inhibitions although it - seven years since Mary was Dr. Who's assistant and 20 years since Ivan left Coronation Street.

In fact, Ivan did return to the Street for a few episodes in 1967 "to be killed off"—but the ghost of Harry Hewitt still returns to haunt him. And he doesn't mind a bit.

The fact that he has done all sorts of other work in the meantime, including a season with the Royal Shakespeare Company, counts little with the public. But Ivan accepts that with good grace and a chuckle.

"I've been out on four tours recently, one after the other, and whatever place we go to, I can almost guarantee that on the first day on my first visit to a pub or a shop somebody wilt say 'Excuse me. I do know you, don't I?' And it's always Coronation Street."

There is the occasional relief, though. One day he called in at a country pub and heard someone mention the Street. He knew what was coming. "A gentleman accosted me and said his wife thought she recognised me from Coronation Street. I said that she was quite right but he went away looking a bit puzzled.

"It was a warm day and I went outside. The man came back and said he was sorry if he had looked surprised because he thought he had recognised me from The Liver Birds. And, of course, I played Nerys Hughes's father in that, too. It made quite a change.

The story is told with great good humour in a rich dark brown voice and there's a postscript.

"John Nettles was in The Liver Birds for a while and his wife was doing some casting for the RSC. They wanted a middle-aged actor and Joyce Nettles suggested me. Of course, Trevor Nunn and John Barton didn't know me from Adam. They don't watch television much, they're too busy.

"Anyway, I did an audition and loved it. It's very hard work but very rewarding. I've been asked to go back about three times but I've always been engaged. I'd love to return there, though."

In fact, one of the reasons he left the Street as to work in the theatre. "I came into the business rather late... I was nearly 30. I'd been with Price Waterhouse and I was just going to do my final exams when I was taken ill. T.B they said it was, and I had to go into a sanatorium.

"I joined an amateur dramatic society while I was in convalescence and after a few years decided that this was what I really wanted to do. I thought it was lucky for me and I think I have been lucky.

"It certainly hasn't made me rich but I'm 58 now and I certainly don't feel it." Mary Tamm's attitude to Dr. Who has certain parallels with Ivan's view of The Street.

A cool beauty with considerable presence and confidence, Mary did just one year-26 episode-playing opposite Tom Baker's Doctor.

"I'm certainly not sorry I did it," she says. "because it was a very good part. She wasn't the usual little girl tagging along. She was a very independent lady.

"Unfortunately, because of the format of the show-it's only half an hour, you know-you have to get an awful lot into it and unless there's someone who keeps asking questions, you can't explain all the technicalities.

"So the part eventually started to revert to something more like that little girl lost and I thought it wasn't really worth carrying on. But I enjoyed doing it very much.

"What's interesting as that it has taken off as a huge cult programme in America and I went to Chicago for a Dr. Who convention last year and this year I've got five more conventions in America lined up, too.

"I still get 10 to 15 fan letters a week and a lot now from America. But it's not just me, obviously, it's everybody who been associated with the programme, which is so popular I sometimes can't quite believe it."

But it was three years before her Dr. experience that Mary first came to prominence playing opposite Jon Voight and Maximilian Schell in the movie, The Odessa File.

And before that, oddly enough, the Yorkshire-born actress had actually appeared a few episodes of—that's right-Coronation Street

Subsequently, she has been seen in an Agatha Christie thriller, Cards On The Table, playing in the West End opposite Gordon Jackson, made a host of television appearances in serials like The Assassination Run, Treachery Game and Jane Eyre, and made a comedy series with Ian Lavender called The Hello Goodbye Man.

And in between it all she has found tine to have a baby, Lauren, who is now four and a half and travelling round the country with Mary on tour which is playing this week in Newcastle of Good Morning Bill.

Her husband, though, is not in the acting game. He's a Lloyd's underwriter. "I'm not daft, love," says Mary, her feature' breaking into a grin. "I'm not stupid.

"It's nice to be married to someone outside the business because it keeps you very sane."

The sanity of Mary, however, and that of Ivan Bemis, too, may have something to do with the fact that far from trying to shrug off the past, they are prepared to enjoy the fact that they are inextricably linked with work which they left behind a long time ago.