Next stop the Sahara for the amazing Dr. Who 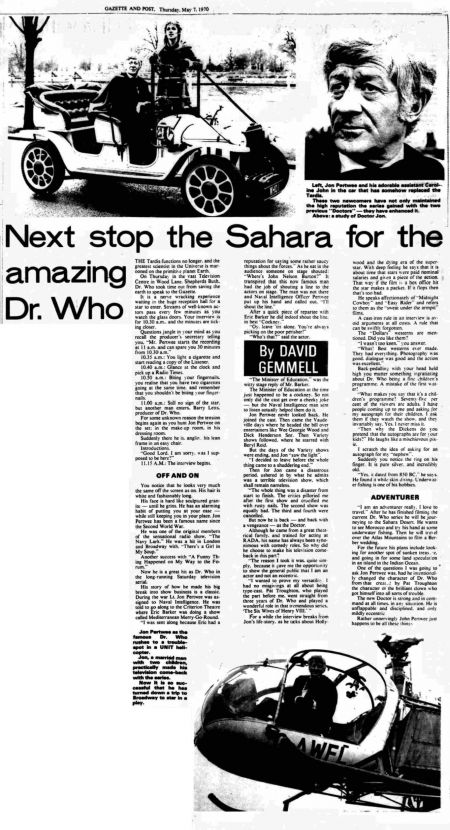 THE Tardis functions no longer, and the greatest scientist in the Universe is marooned on the primitive planet Earth.

On Thursday in the vast Television Centre in Wood Lane, Shepherds Bush, Dr. Who took time out from saving the earth to speak to the Gazette.

It is a nerve wracking experience waiting in the huge reception hall for a star to enter. Streams of well-known actors pass every few minutes as you watch the glass doors. Your interview is for 10.30 a.m.. and the minutes are ticking closer.

Questions jangle in your mind as you recall the producer's secretary telling you, "Mr. Pertwee starts the recording at 11 a.m. and can spare you 30 minutes from 10.30 a.m."

10.35 a.m.: You light a cigarette and start reading a copy of the Listener.

For some unknown reason the tension begins again as you hunt Jon Pertwee on the set: in the make-up room. in his dressing room.

Suddenly there he is, angling his lean frame in his easy chair.

"Good Lord. I am sorry, was I supposed to be here?"

You notice that he looks very much the same off the screen as on. His hair is white and fashionably long.

His face is hard like sculptured granite - until he grins. He has an alarming habit of putting you at your ease - while still keeping you in your place. Jon Pertwee has been a famous name since the Second World War.

He was one of the original members of the sensational radio show, "The Navy Lark." He was a hit in London and Broadway with. "There's a Girl in My Soup."

Another success with "A Funny Thing Happened on My Way to the Forum."

Now he is a great hit as Dr. Who in the long-running Saturday television serial.

His story of how he made his big break into show business is a classic. During the war Lt. Jon Pertwee was assigned to Naval Intelligence. He was told to go along to the Criterion Theatre where Eric Barker was doing a show called Mediterranean Merry-Go-Round.

Jon, a married man with two children, practically made his television come-back with the series.

Now it is so successful that he has turned down a trip to Broadway to star in a play.

"I was sent along because Eric had a reputation for saying some rather saucy things about the forces." As he sat in the audience someone on stage shouted: "Where's John Nelson Burton?" It transpired that this now famous man had the job of shouting a line to the actors on stage. The man was not there and Naval Intelligence Officer Pertwee put up his hand and called out. "I'll shout the line."

After a quick piece of repartee with Eric Barker he did indeed shout the line. in best "Cockney"

"The Minister of Education," was the witty stage reply of Mr. Barker.

The Minister of Education at the time just happened to be a cockney. So not only did the cast get over a cheeky joke but the Naval Intelligence man sent to listen actually helped them do it.

Jon Pertwee never looked back. He joined the cast. Then came the Vaudeville days where he headed the bill over entertainers like Wee Georgie Wood and Dick Henderson Snr. Then Variety shows followed. where he starred with Beryl Reid.

But the days of the Variety shows were ending and Jon "saw the light".

"I decided to leave before the whole thing came to a shuddering end."

Then for Jon came a disastrous period, ushered in by what he admits was a terrible television show, which shall remain nameless.

"The whole thing was a disaster from start to finish. The critics pilloried me after the first show and crucified me with rusty nails. The second show equally bad. The third and fourth were cancelled.

But now he is back - and back with a vengeance as the Doctor.

Although he came from a great theatrical family, and trained for acting at RADA, his name has always been synonimous with comedy roles. So why did he choose to make his television comeback in this part?

"The reason I took it was, quite simply, because it gave me the opportunity to show the general public that I am an actor and not an eccentric.

"I wanted to prove my versatility. I had no misgivings at all about being type-cast. Pat Troughton, who played the part before me, went straight from three years of Dr. Who and played a wonderful role in that tremendous series, 'The Six Wives of Henry VIII,'"

For a while the interview breaks from Jon's life-story, as he talks about Hollywood and the dying era of the superstar. With deep feeling he says that it is about time that stars were paid nominal salaries and given a piece of the action. That way if the film is a box office hit the star makes a packet. If it flops then that's too bad.

He speaks affectionately of "Midnight Cowboy" and "Easy Rider" and refers to them as the "sweat under the armpit" films.

A cast-iron rule in an interview is avoid arguments at all costs. A rule that can be swiftly forgotten.

The "Dollars" westerns are mentioned. Did you like them?

"What! Best westerns ever made. They had everything. Photography was good, dialogue as good and the action was excellent."

Back-pedalling with your head held high you mutter something ingratiating about Dr. Who being a fine children's programme. A mistake of the first water!

"What makes you say that it's a children's programme? Seventy-five per cent of the viewers are adults. I have people coming up to me and asking for my autograph for their children. I ask them if they watch the show. and they invariably say. Yes. I never miss it.

"Then why the Dickens do you pretend that the autographs are for our kids?" He laughs like a mischievous pixie.

I scratch the idea of asking for an autograph for my "nephew".

Suddenly you notice the ring on his finger. It is pure silver, and incredibly old.

"Yes, it dated from 850 BC," he says. He found it while skin diving. Underwater fishing is one of his hobbies.

"I am an adventurer really. I love to travel." After he has finished filming the current Dr. Who series he will be journeying to the Sahara Desert. He wants to see Morocco and try his hand at some underwater fishing. Then he will travel over the Atlas Mountains to film a Berber wedding.

For the future his plans include looking for another spot of sunken treasure. and going in for some land speculation in an island in the Indian Ocean.

One of the questions I was going to ask Jon Pertwee was, had he intentionally changed the character of Dr. Who from that created by Pat Troughton the character of the brilliant clown who got himself into all sorts of trouble.

The new Doctor is strong and in command at all times, in any situation. He is unflappable and disciplined. and only mildly eccentric.

Rather unnervingly John Pertwee just happens to be all these things.

Caption: Left, Jon Pertwee and his adorable assistant Caroline John in the car that has somehow replace the Tardis.

These two newcomers have not only maintained the high reputation the series gained with the two previous "Doctors" - they have enhanced it.

Above: a story of Doctor Jon

Caption: Jon Pertwee as the famous Dr. Who rushes to a troublespot in a UNIT helicopter.