Now take your seats for a trip to the Moon, boys and girls 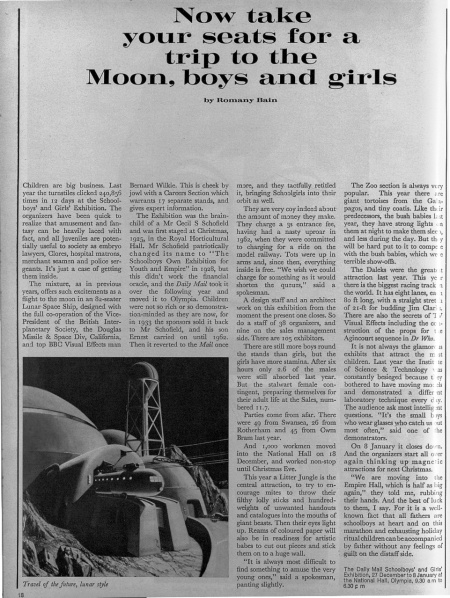 Children are big business. Last year the turnstiles clicked 240,856 times in 12 days at the Schoolboys' and Girls' Exhibition. The organizers have been quick to realize that amusement and fantasy can be heavily laced with fact, and all juveniles are potentially useful to society as embryo lawyers, Clores, hospital matrons, merchant seamen and police sergeants. It's just a case of getting them inside.

The mixture, as in previous years, offers such excitements as a flight to the moon in an 82-seater Lunar Space Ship, designed with the full co-operation of the Vice-President of the British Interplanetary Society, the Douglas Missile & Space Div, California, and top BBC Visual Effects man Bernard Wilkie. This is cheek by jowl with a Careers Section which warrants 17 separate stands, and gives expert information.

The Exhibition was the brainchild of a Mr Cecil S Schofield and was first staged at Christmas, 1925, in the Royal Horticultural Hall. Mr Schofield patriotically changed its name to "The Schoolboys Own Exhibition for Youth and Empire" in 1928, but this didn't work the financial oracle, and the Daily Mail took it over the following year and moved it to Olympia. Children were not so rich or so demonstration-minded as they are now, for in 1933 the sponsors sold it back to Mr Schofield, and his son Ernest carried on until 1962. Then it reverted to the Mail once more, and they tactfully retitled it, bringing Schoolgirls into their orbit as well.

They are very coy indeed about the amount of money they make. They charge a 3s entrance fee, having had a nasty uproar in 1962, when they were committed to charging for a ride on the model railway. Tots were up in arms and, since then, everything inside is free. "We wish we could charge for something as it would shorten the queues," said a spokesman.

A design staff and an architect work on this exhibition from the moment the present one closes. So do a staff of 38 organizers, and nine on the sales management side. There are 105 exhibitors.

There are still more boys round the stands than girls, but the girls have more stamina. After six hours only 2.6 of the males were still absorbed last year. But the stalwart female contingent, preparing themselves for their adult life at the Sales, numbered 11.7.

Parties come from afar. There were 49 from Swansea, 26 from Rotherham and 45 from Cwm Bram last year.

And 1,000 workmen moved into the National Hall on 18 December, and worked non-stop until Christmas Eve.

This year a Litter Jungle is the central attraction, to try to encourage mites to throw their filthy lolly sticks and hundredweights of unwanted handouts and catalogues into the mouths of giant beasts. Then their eyes light up. Reams of coloured paper will also be in readiness for artistic babes to cut out pieces and stick them on to a huge wall.

"It is always most difficult to find something to amuse the very young ones," said a spokesman, panting slightly.

The Zoo section is always very popular. This year there are giant tortoises from the Galapagos, and tiny coatis. Like their predecessors, the bush babies 1ast year, they have strong lights on them at night to make them sleep and less during the day. But they will be hard put to it to compare with the bush babies, which were terrible show-offs.

The Daleks were the greatest attraction last year. This year there is the biggest racing track a the world. It has eight lanes, each 80 ft long, with a straight stretch of 21-ft for budding Jim Clar. There are also the secrets of Visual Effects including the construction of the props for the Agincourt sequence in Dr Who.

It is not always the glamorous exhibits that attract the most children. Last year the Institute of Science & Technology was constantly besieged because they bothered to have moving models and demonstrated a different laboratory technique every day. The audience ask most intelligent questions. "It's the small boys who wear glasses who catch us out most often," said one of the demonstrators.

On 8 January it closes down. And the organizers start all over again thinking up magnetic attractions for next Christmas.

"We are moving into the Empire Hall, which is half as big again," they told me, rubbing their hands. And the best of luck to them, I say. For it is a well-known fact that all fathers are schoolboys at heart and on this marathon and exhausting holiday ritual children can be accompanied by father without any feelings of guilt on the distaff side.