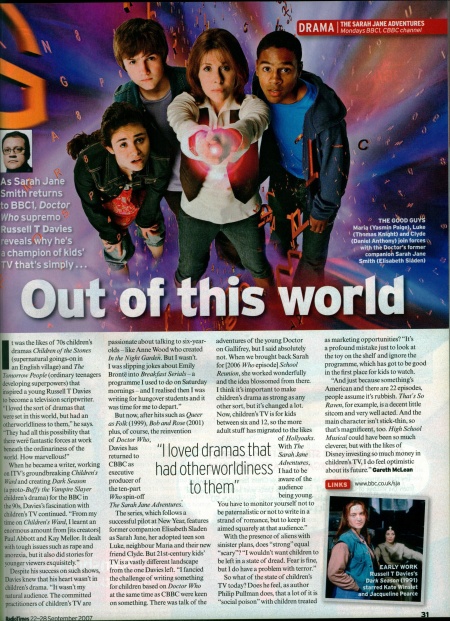 It was the likes of 70s children's dramas Children of the Stones (supernatural goings-on in an English village) and The Tomorrow People (ordinary teenagers developing superpowers) that inspired a young Russell T Davies to become a television scriptwriter.

I loved the sort of dramas that were set in this world, but had an otherworldliness to them," he says. "They had all this possibility that there were fantastic forces at work beneath the ordinariness of the world. How marvellous!"

When he became a writer, working on ITV's groundbreaking Children's Ward and creating Dark Season (a proto-Buffy the Vampire Slayer children's drama) for the BBC in the 90s, Davies's fascination with children's TV continued. "From my time on Children's Ward, I learnt an enormous amount from [its creators] Paul Abbott and Kay Mellor. It dealt with tough issues such as rape and anorexia, but it also did stories for younger viewers exquisitely."

Despite his success on such shows, Davies knew that his heart wasn't in children's drama. "It wasn't my natural audience. The committed practitioners of children's TV are passionate about talking to six-year-olds — like Anne Wood who created In the Night Garden. But I wasn't. I was slipping jokes about Emily Brontë into Breakfast Serials —a programme I used to do on Saturday mornings — and I realised then I was writing for hungover students and it was time for me to depart."

But now, after hits such as Queer as Folk (1999), Bob and Rose (2001) plus, of course, the reinvention of Doctor Who, Davies has returned to CBBC as executive producer of the ten-part Who spin-off The Sarah Jane Adventures.

The series, which follows a successful pilot at New Year, features former companion Elisabeth Sladen as Sarah Jane, her adopted teen son Luke, neighbour Maria and their new friend Clyde. But 21st-century kids' TV is a vastly different landscape from the one Davies left. "I fancied the challenge of writing something for children based on Doctor Who at the same time as CBBC were keen on something. There was talk of the adventures of the young Doctor on Gallifrey, but I said absolutely not. When we brought back Sarah for [2006 Who episode] School Reunion, she worked wonderfully and the idea blossomed from there. I think it's important to make children's drama as strong as any other sort, but it's changed a lot. Now, children's TV is for kids between six and 12, so the more adult stuff has migrated to the likes of Hollyoaks. With The Sarah Jane Adventures, I had to be aware of the audience being young. You have to monitor yourself not to be paternalistic or not to write in a strand of romance, but to keep it aimed squarely at that audience."

With the presence of aliens with sinister plans, does "strong" equal "scary"? "I wouldn't want children to be left in a state of dread. Fear is fine, but I do have a problem with terror."

So what of the state of children's TV today? Does he feel, as author Philip Pullman does, that a lot of it is "social poison" with children treated as marketing opportunities? "It's a profound mistake just to look at the toy on the shelf and ignore the programme, which has got to be good in the first place for kids to watch.

"And just because something's American and there are 22 episodes, people assume it's rubbish. That's So Raven, for example, is a decent little sitcom and very well acted. And the main character isn't stick-thin, so that's magnificent, too. High School Musical could have been so much cleverer, but with the likes of Disney investing so much money in children's TV, I do feel optimistic about its future."