PBS: From brains to bucks and back 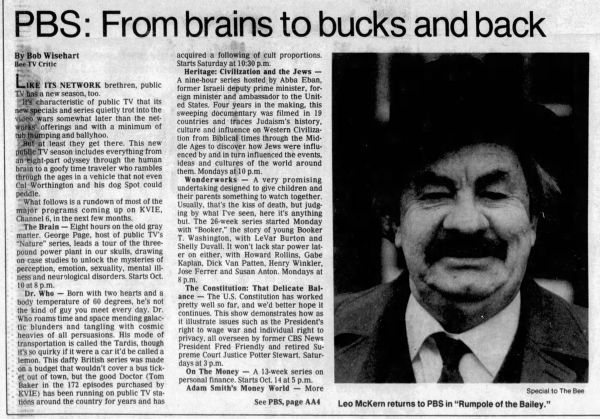 LIKE ITS NETWORK brethren, public TV has a new season, too.

It's characteristic of public TV that its new specials and series quietly trot into the video wars somewhat later than the networks' offerings and with a minimum of tub thumping and ballyhoo.

But at least they get there. This new public TV season includes everything from an eight-part odyssey through the human brain to a goofy time traveler who rambles through the ages in a vehicle that not even Cal Worthington and his dog Spot could peddle.

What follows is a rundown of most of the major programs coming up on KVIE, Channel 6, in the next few months.

Dr. Who — Born with two hearts and a body temperature of 60 degrees, he's not the kind of guy you meet every day. Dr. Who roams time and space mending galactic blunders and tangling with cosmic heavies of all persuasions. His mode of transportation is called the Tardis, though it's so quirky if it were a car it'd be called a lemon. This daffy British series was made on a budget that wouldn't cover a bus ticket out of town, but the good Doctor (Tom Baker in the 172 episodes purchased by KVIE) has been running on public TV stations around the country for years and has acquired a following of cult proportions. Starts Saturday at 10:30 p.m.