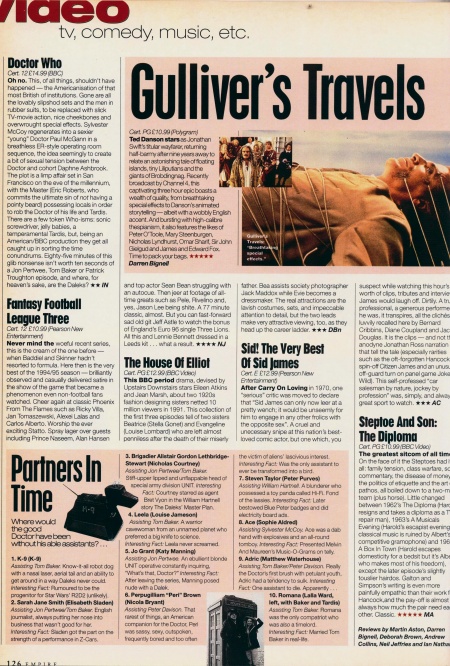 Oh no. This, of all things, shouldn't have happened — the Americanisation of that most British of institutions. Gone are all the lovably slipshod sets and the men in rubber suits, to be replaced with slick TV-movie action, nice cheekbones and overwrought special effects. Sylvester McCoy regenerates into a sexier "young" Doctor Paul McGann in a breathless ER-style operating room sequence, the idea seemingly to create a bit of sexual tension between the Doctor and cohort Daphne Ashbrook. The plot is a limp affair set in San Francisco on the eve of the millennium, with the Master (Eric Roberts, who commits the ultimate sin of not having a pointy beard) possessing locals in order to rob the Doctor of his life and Tardis. There are a few token Who-isms: sonic screwdriver, jelly babies, a temperamental Tardis, but, being an American/BBC production they get all caught up in sorting the time conundrums. Eighty-five minutes of this glib nonsense isn't worth ten seconds of a Jon Pertwee, Tom Baker or Patrick Troughton episode, and where, for heaven's sake, are the Daleks? ★★ IN

Where would the good Doctor have been without his able assistants? ...

Assisting Tom Baker. Know-it-all robot dog with a nasal laser, aerial tail and an ability to get around in a way Daleks never could. Interesting Fact: Rumoured to be the progenitor for Star Wars' R2D2 (unlikely).

2. Sarah Jane Smith (Elisabeth Sladen) Assisting Jon Pertwee/Tom Baker. English journalist, always putting her nose into business that wasn't good for her. Interesting Fact: Sladen got the part on the strength of a performance in Z-Cars.

Assisting Peter Davison. That rarest of things, an American companion for the Doctor, Peri was sassy, sexy, outspoken, frequently bored and too often the victim of aliens' lascivious interest. Interesting Fact: Was the only assistant to ever be transformed into a bird.

Assisting Sylvester McCoy. Ace was a dab hand with explosives and an all-round tomboy. Interesting Fact: Presented Melvin And Maureen's Music-O-Grams on telly.

10. Romana (Lalla Ward, left, with Baker and Tardis) Assisting Tom Baker. Romana was the only compatriot who was also a timelord. Interesting Fact: Married Tom Baker in real-life.