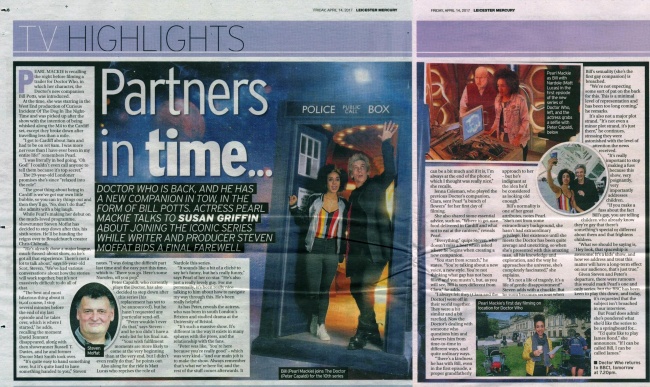 DOCTOR WHO IS BACK, AND HE HAS A NEW COMPANION IN TOW, IN THE FORM OF BILL POTTS. ACTRESS PEARL MACKIE TALKS TO SUSAN GRIFFIN - ABOUT JOINING THE ICONIC SERIES WHILE WRITER AND PRODUCER STEVEN MOFFAT BIDS A FINAL FAREWELL

PEARL MACKIE is recalling the night before filming a trailer for Doctor Who, in which her character, the Doctor's new companion Bill Potts, was introduced.

At the time, she was starring in the West End production of Curious Incident Of The Dog In The Night-Time and was picked up after the show with the intention of being whisked along the M4 to the Cardiff set, except they broke down after travelling less than a mile.

'I got to Cardiff about 3am and had to be on set 6am. I was more nervous than I have ever been in my entire life!" remembers Pearl.

"I was literally in bed going, 'Oh God!' I couldn't even call anyone to tell them because it's top secret!

The 29-year-old Londoner promises she's since "relaxed Into the role':

"The great thing about being in Cardiff is we've got our own little bubble, so you can try things out and then they'll go, 'No, don't do that," she admits with a big laugh.

While Pearl's making her debut on the much-loved programme, showrunner Steven Moffat has decided to step down after this, his sixth series. He'll be handing the reigns over to Broadchurch creator Chris Chibnall.

"Iles already done a major league, much-fussed-about show, so he's got all that experience. There's not a lot to talk about; says 55-year-old Scot, Steven. "We've had various conversations about how the stories will work together, but it's not massively difficult to do all of that.

"The best and most hilarious thing about it is of course, I stop several minutes before the end of my last episode and he takes over, which is where I started," he adds, recalling the moment David Tennant disappeared, along with then showrunner Russell T. Davies, and he and former Doctor Matt Smith took over.

"It's quite easy to hand something over, but it's quite hard to have something handed to you," Steven notes. "I was doing the difficult part last time and the easy part this time, which is: 'There you go. Here's some Nurofen, off you pop."

Peter Capaldi, who currently plays the Doctor, has also decided to step down after this series (his replacement has yet to be announced), but he hasn't requested any particular send-off.

"Peter wouldn't ever do that; says Steven and he too didn't have a wish-list for his final run.

"Your wish fulfilment moments are more likely to come at the very beginning than at the very end, but I didn't even really do that," he points out.

Also along for the ride is Matt Lucas who reprises the role of Nardole this series.

"It sounds like a bit of a cliché to say he's funny, but he's really funny; says Pearl of her co-star. "He's also just a really lovely guy. For me personally, it's been really nice talking to him about how to navigate my way through this. He's been really helpful."

As has Peter, reveals the actress, who was born in south London's Brixton and studied drama at the University of Bristol.

"It's such a massive show. It's different in the way it exists in many spheres with the press, and the relationship with the fans.

"Peter was like, 'You're here because you're really good' - which was very kind -'and our main job is to make the show. Always remember that's what we're here for, and the rest of the stuff comes afterwards. It can be a bit much and if it is, I'm always at the end of the phone', which I thought was really nice," she recalls.

Jenna Coleman, who played the previous Doctor's companion, Clara, sent Pearl "a bunch of flowers" for her first day of filming.

She also shared some essential advice, such as, "Where to get nice food delivered in Cardiff and what not to eat at the canteen," reveals Pearl.

"Everything," quips Steven, who doesn't miss a beat when asked where he beings when creating a new companion.

"You start from scratch," he states. "You're talking about a new voice, a new style. You're not thinking what gap has not been filled and you mustn't, but, as you will see, Bill is very different from Clara," he adds.

"I always felt they (Clara and the Doctor) were off in their world together. They were a bit similar and a bit rarefied. Now the Doctor's dealing with someone who questions him and skewers him from time-to-time in different ways, and quite ordinary ways.

"There's a kindness he has with Bill, even in the first episode, a proper grandfatherly approach to her - but he's indignant at the idea he'd be considered as looking old enough."

Bill's normality is one of her great attributes, notes Pearl. "She's not from some extraordinary background, the hasn't had extraordinary privilege. Her existence until she meets the Doctor has been quite average and unexciting, so when she's presented with this amazing man, all his knowledge and exploration, and the way he approaches the universe, she's completely fascinated; she explains.

"It's not a life of tragedy, it's a life of gentle disappointment!" Steven adds with a chuckle. But he soon becomes serious when Bill's sexuality (she's the first gay companion) is broached.

"We're not expecting some sort of pat on the back for this. This is a minimal level of representation and has been too long coming," he remarks.

It's also not a major plot strand. "It's not even a minor plot strand, it's just there," he continues, stressing they were astonished with the level of attention the news received.

"If you make a fuss about the fact that Bill's gay, you are telling children who already know they're gay that there's something's special or different about them and that frightens children.

"What we should be saying is, 'Hey look, that spaceship is awesome' It's a lads' show, and how we address and treat this matter will have a long-term effect on our audience, that's just true."

Given Steven and Peter's departure, there were rumours this would mark Pearl's one and only series, hut the BBC has been keen to play this down, and today, it's requested that the subject isn't broached in our interview.

But Pearl does admit she's pondered what she'd like the series to be a springboard for...

Doctor Who returns to BBC1, tomorrow at 7.20pm.