Peace out from a Beloved 'Doctor Who' star 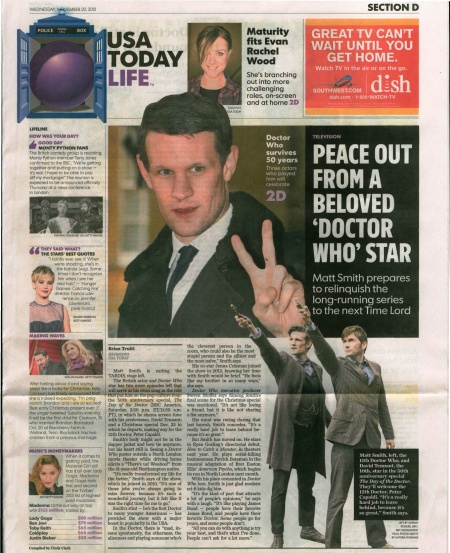 The British actor and Doctor Who star has two more episodes left that will serve as his swan song in the role -that put him on the pop-culture mapp: the 50th anniversary special, The Day of the Doctor (BBC America, Saturday, 2:50 p.m. ET/11:50 a.m. PT), in which he shares screen time with his predecessor, David Tennant; and a Christmas special Dec. 25 in which he departs, making way for the 12th Doctor, Peter Capaldi.

Smith's body might not be in the dapper jacket and bow tie anymore, but his heart still is. Seeing a Doctor Who poster outside a North London movie theater while driving home elicits a "There's us! Woohoo!" from the 31-year-old Northampton native.

"It's really transformed my life for the better," Smith says of the show, which he joined in 2010. "It's one of those jobs you're always going to miss forever, because it's such a wonderful journey, but it felt like it was the right time for me to go."

Smith's stint — he's the first Doctor to many younger Americans — has provided the show with a major boost in popularity in the USA.

In the Doctor, there is "mad, insane spontaneity, the otherness, the alienness and playing someone who's

the cleverest person in the room, who could also be the most stupid person and the silliest and the most naive," Smith says.

His co-star Jenna Coleman joined the show in 2012, knowing her time with Smith would be brief. "He feels like my brother in so many ways," she says.

Doctor Who executive producer Steven Moffat says filming Smith's final scene for the Christmas special was emotional. "It's not like losing a friend, but it is like not sharing a flat anymore."

His mind was racing during that last hurrah, Smith concedes. "It's a really hard job to leave behind because it's so great."

But Smith has moved on. He stars in Ryan Gosling's directorial debut, How to Catch a Monster, in theaters next year. He plays serial-killing businessman Patrick Bateman in the musical adaptation of Bret Easton Ellis' American Psycho, which begins its run in North London next month.

With his place cemented in Doctor Who lore, Smith is just glad modem sci-fi kids dig him.

"All you can do with anything is try your best, and that's what I've done. People can't ask for a lot more."