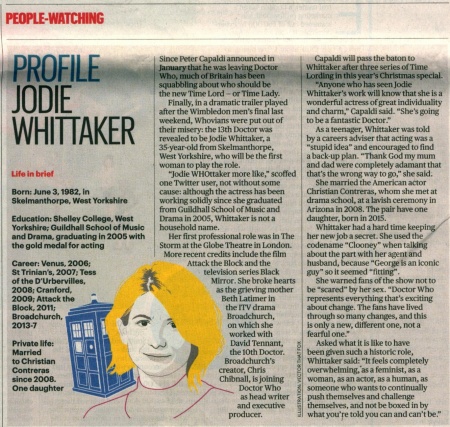 Education: Shelley College, West Yorkshire; Guildhall School of Music and Drama, graduating in 2005 with the gold medal for acting

Private life: Married to Christian Contreras since 2008. One daughter

Since Peter Capaldi announced in January that he was leaving Doctor Who, much of Britain has been squabbling about who should be the new Time Lord - or Time Lady.

Finally, in a dramatic trailer played after the Wimbledon men's final last weekend, Whovians were put out of their misery: the 13th Doctor was revealed to be Jodie Whittaker, a 35-year-old from Skelmanthorpe, West Yorkshire, who will be the first woman to play the role.

"Jodie WHOttaker more like," scoffed one Twitter user, not without some cause: although the actress has been working solidly since she graduated from Guildhall School of Music and Drama in 2005, Whittaker is not a household name.

Her first professional role was in The Storm at the Globe Theatre in London. More recent credits include the film Attack the Block and the television series Black Mirror. She broke hearts as the grieving mother Beth Latimer in the ITV drama Broadchurch, on which she worked with David Tennant, the 10th Doctor. Broadchurch's creator, Chris Chibnall, is joining Doctor Who as head writer and executive producer.

Capaldi will pass the baton to Whittaker after three series of Time Lording in this year's Christmas special.

"Anyone who has seen Jodie Whittaker's work will know that she is a wonderful actress of great individuality and charm," Capaldi said. "She's going to be a fantastic Doctor."

As a teenager, Whittaker was told by a careers adviser that acting was a "stupid idea" and encouraged to find a back-up plan. "Thank God my mum and dad were completely adamant that that's the wrong way to go," she said.

She married the American actor Christian Contreras, whom she met at drama school, at a lavish ceremony in Arizona in 2008. The pair have one daughter, born in 2015.

Whittaker had a hard time keeping her new job a secret. She used the codename "Clooney" when talking about the part with her agent and husband, because "George is an iconic guy" so it seemed "fitting".

She warned fans of the show not to be "scared" by her sex. "Doctor Who represents everything that's exciting about change. The fans have lived through so many changes, and this is only a new, different one, not a fearful one."

Asked what it is like to have been given such a historic role, Whittaker said: "It feels completely overwhelming as a feminist, as a woman, as an actor, as a human, as someone who wants to continually push themselves and challenge themselves, and not be boxed in by what you're told you can and can't be."