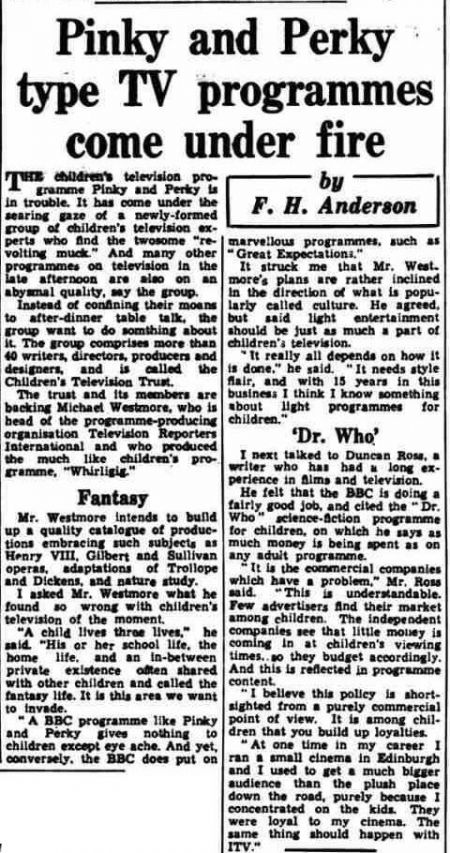 Instead of confining their moans to after-dinner table talk, the group want to do somthing about it. The group comprises more than 40 writers, directors, producers and designers, and is called the Children's Television Trust.

The trust and its members are backing Michael Westmore, who is head of the programme-producing organisation Television Reporters International and who produced the much like children's programme, "Whirligig."

Mr. Westmore intends to build up a quality catalogue of productions embracing such subjects as Henry VIII, Gilbert and Sullivan operas, adaptations of Trollope and Dickens, and nature study.

I asked Mr. Westmore what he found so wrong with children's television of the moment.

"A child lives throe lives," he said. "His or her school life, the home life, and an in-between private existence often shared with other children and called the fantasy life. It is this area we want to invade.

"A BBC programme like Pinky and Perky gives nothing to children except eye ache. And yet, conversely, the BBC does put on marvellous programmes, such as "Great Expectations."

It struck me that Mr. West. more's plans are rather inclined In the direction of what is popularly called culture. He agreed, but said light entertainment should be just as much a part of children's television.

"It really all depends on how it is done," he said. "It needs style flair, and with 15 years in this business I think I know something about light programmes for children."

I next talked to Duncan Ross, a writer who has had a long experience in films and television.

He felt that the BBC is doing a fairly good job, and cited the "Dr. Who" science-fiction programme for children, on which he says as much money is being spent as on any adult programme.

"It is the commercial companies which have a problem," Mr. Ross said. "This is understandable. Few advertisers find their market among children. The independent companies see that little money is coming in at children's viewing times, so they budget accordingly. And this is reflected in programme content.

"I believe this policy is shortsighted from a purely commercial point of view. It is among children that you build up loyalties.

"At one time in my career I ran a small cinema in Edinburgh and I used to get a much bigger audience than the plush place down the road, purely because I concentrated on the kids. They were loyal to my cinema. The same thing should happen with ITV."