Playing Doctor Who is Delightful 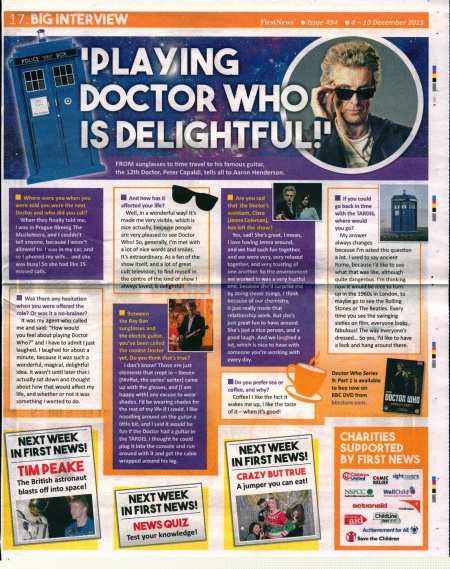 FROM sunglasses to time travel to his famous guitar, the 12th Doctor, Peter Capaldi, tells all to Aaron Henderson.

Where were you when you were told you were the next Doctor and who did you call?

When they finally told me, I was in Prague filming The Musketeers, and I couldn't tell anyone, because I wasn't allowed to. I was in my car, and so I phoned my wife... and she was busy! So she had like 15 missed calls.

Was there any hesitation when you were offered the role? Or was it a no-brainer?

It was my agent who called me and said: "How would you feel about playing Doctor Who?" and I have to admit I just laughed. I laughed for about a minute, because it was such a wonderful, magical, delightful idea. It wasn't until later that I actually sat down and thought about how that would affect my life, and whether or not it was something I wanted to do.

And how has it affected your life?

Well, in a wonderful way! It's made me very visible, which is nice actually, because people are very pleased to see Doctor Who! So, generally, I'm met with a lot of nice words and smiles. It's extraordinary. As a fan of the show itself, and a lot of great cult television, to find myself in the centre of the kind of show I always loved, is delightful!

Between the Ray Ban sunglasses and the electric guitar, you've been called the coolest Doctor yet. Do you think that's true?

I don't know! Those are just elements that crept in — Steven [Moffat, the series' writer] came up with the glasses, and [I am happy with] any excuse to wear shades. I'd be wearing shades for the rest of my life if I could. I like noodling around on the guitar a little bit, and I said it would be fun if the Doctor had a guitar in the TARDIS. I thought he could plug it into the console and run around with it and get the cable wrapped around his leg.

Are you sad that the Doctor's assistant, Clara [Jenna Coleman], has left the show?

Yes, sad! She's great. I mean, I love having Jenna around, and we had such fun together, and we were very, very relaxed together, and very trusting of one another. So the environment we worked in was a very fruitful one, because she'd surprise me by doing clever things. I think because of our chemistry, it just really made that relationship work. But she's just great fun to have around. She's just a nice person, and a good laugh. And we laughed a lot, which is nice to have with someone you're working with every day.

Do you prefer tea or coffee, and why?

Coffee! I like the fact it wakes me up, I like the taste of it — when it's good!

If you could go back in time with the TARDIS, where would you go?

My answer always changes because I'm asked this question a lot. I used to say ancient Rome, because I'd like to see what that was like, although quite dangerous. I'm thinking now it would be nice to turn up in the 1960s in London, to maybe go to see the Rolling Stones or The Beatles. Every time you see the swinging sixties on film, everyone looks fabulous! The way everyone's dressed... So yes, I'd like to have a look and hang around there.

Doctor Who Series 9: Part 1 is available to buy now on BBC DVD from bbcstore.com.