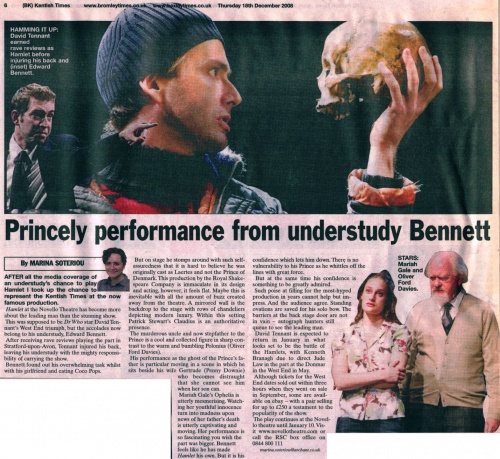 AFTER all the media coverage of an understudy's chance to play Hamlet I took up the chance to represent the Kentish Times at the now famous production.

Hamlet at the Novello Theatre has become more about the leading man than the stunning show. This was supposed to be Dr Who star David Tennant's West End triumph, but the accolades now belong to his understudy, Edward Bennett.

After receiving rave reviews playing the part in Stratford-upon-Avon, Tennant injured his back, leaving his understudy with the mighty responsibility of carrying the show.

Bennett found out his overwhelming task whilst with his girlfriend and eating Coco Pops.

But on stage he stomps around with such self-assuredness that it is hard to believe he was originally cast as Laertes and not the Prince of Denmark. This production by the Royal Shakespeare Company is immaculate in its design and acting, however, it feels flat. Maybe this is inevitable with all the amount of buzz created away from the theatre. A mirrored wall is the backdrop to the stage with rows of chandeliers depicting modern luxury. Within this setting Patrick Stewart's Claudius is an authoritative presence.

The murderous uncle and now stepfather to the Prince is a cool and collected figure in sharp contrast to the warm and bumbling Polonius (Oliver Ford Davies).

His performance as the ghost of the Prince's father is particular moving in a scene in which he sits beside his wife Gertrude (Penny Downie) who becomes distraught that she cannot see him when her son can.

Mariah Gale's Ophelia is utterly mesmerising. Watching her youthful innocence turn into madness upon news of her father's death is utterly captivating and moving. Her performance is so fascinating you wish the part was bigger. Bennett feels like he has made Hamlet his own. But it is his confidence which lets him down. There is no vulnerability to his Prince as he whittles off the lines with great force.

But at the same time his confidence is something to be greatly admired. Such poise at filling for the most-hyped production in years cannot help but impress. And the audience agree. Standing ovations are saved for his solo bow. The barriers at the back stage door are not in vain — autograph hunters still queue to see the leading man.

David Tennant is expected to return in January in what looks set to be the battle of the Hamlets, with Kenneth Branagh due to direct Jude Law in the part at the Donmar in the West End in May.

Although tickets for the West End dates sold out within three hours when they went on sale in September, some are available on ebay — with a pair selling for up to £250 a testament to the popularity of the show.

The play continues at the Novel-lo theatre until January 10. Visit www.novellotheatre.com or call the RSC box office on

HAMMING IT UP: David Tennant earned rave reviews as Hamlet before injuring his back and (inset) Edward Bennett.