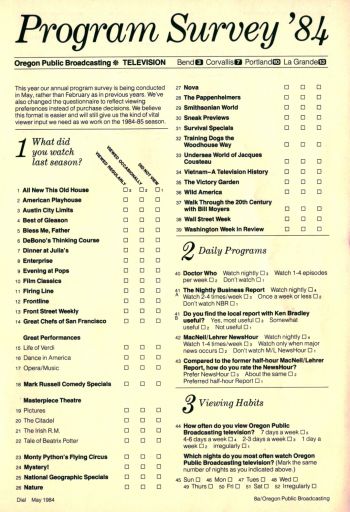 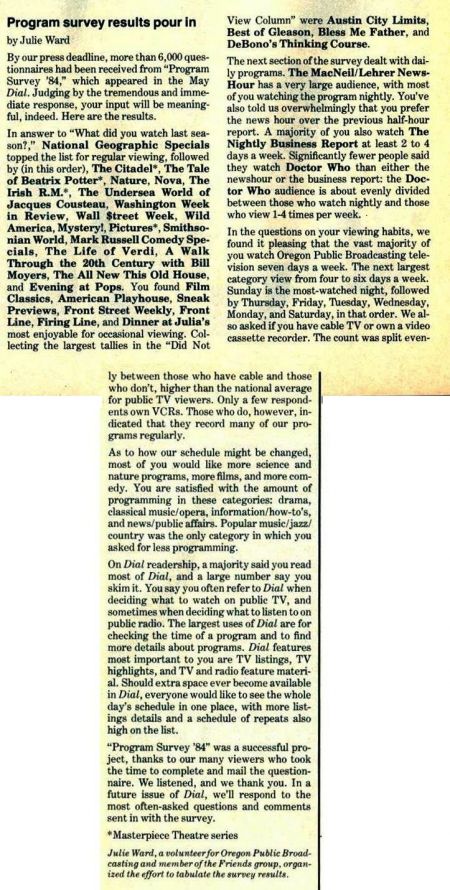 By our press deadline, more than 6,000 questionnaires had been received from "Program Survey '84," which appeared in the May Dial. Judging by the tremendous and immediate response, your input will be meaningful, indeed. Here are the results.

In answer to "What did you watch last season?," National Geographic Specials topped the list for regular viewing, followed by (in this order), The Citadel*, The Tale of Beatrix Potter*, Nature, Nova, The Irish R.M.*, The Undersea World of Jacques Cousteau, Washington Week in Review, Wall $treet Week, Wild America, Mystery!, Pictures*, Smithsonian World, Mark Russell Comedy Specials, The Life of Verdi, A Walk Through the 20th Century with Bill Moyers, The All New This Old House, and Evening at Pops. You found Film Classics, American Playhouse, Sneak Previews, Front Street Weekly, Front Line, Firing Line, and Dinner at Julia's most enjoyable for occasional viewing. Collecting the largest tallies in the "Did Not View Column" were Austin City Limits, Best of Gleason, Bless Me Father, and DeBono's Thinking Course.

The next section of the survey dealt with daily programs. The MacNeil/ Lehrer News-Hour has a very large audience, with most of you watching the program nightly. You've also told us overwhelmingly that you prefer the news hour over the previous half-hour report. A majority of you also watch The Nightly Business Report at least 2 to 4 days a week. Significantly fewer people said they watch Doctor Who than either the newshour or the business report: the Doctor Who audience is about evenly divided between those who watch nightly and those who view 1-4 times per week.

In the questions on your viewing habits, we found it pleasing that the vast majority of you watch Oregon Public Broadcasting television seven days a week. The next largest category view from four to six days a week. Sunday is the most-watched night, followed by Thursday, Friday, Tuesday, Wednesday, Monday, and Saturday, in that order. We also asked if you have cable TV or own a video cassette recorder. The count was split evenly between those who have cable and those who don't, higher than the national average for public TV viewers. Only a few respondents own VCRs. Those who do, however, indicated that they record many of our programs regularly.

As to how our schedule might be changed, most of you would like more science and nature programs, more films, and more comedy. You are satisfied with the amount of programming in these categories: drama, classical music/opera, information/how-to's, and news/public affairs. Popular music/jazz/ country was the only category in which you asked for less programming.

On Dial readership, a majority said you read most of Dial, and a large number say you skim it. You say you often refer to Dial when deciding what to watch on public TV, and sometimes when deciding what to listen to on public radio. The largest uses of Dial are for checking the time of a program and to find more details about programs. Dial features most important to you are TV listings, TV highlights, and TV and radio feature material. Should extra space ever become available in Dial, everyone would like to see the whole day's schedule in one place, with more listings details and a schedule of repeats also high on the list.

"Program Survey '84" was a successful project, thanks to our many viewers who took the time to complete and mail the questionnaire. We listened, and we thank you. In a future issue of Dial, well respond to the most often-asked questions and comments sent in with the survey.

Julie Ward. a volunteer for Oregon Public Broadcasting and member of the Friends group, organized the effort to tabulate the survey results.