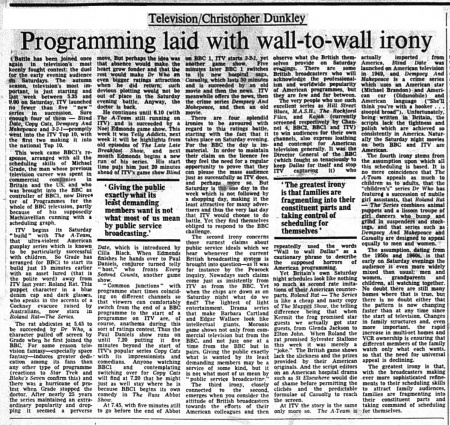 Battle has been joined once again in television's most keenly fought contest: the duel for the early evening audience on Saturdays. The autumn season, television's most important, is just starting and last week between 5.35 and 9.00 on Saturday, ITV launched no fewer than five "new" series in succession. Sure enough four of them - Blind Date, Copy Cats, Dempsey And Makepeace and 3-2-1 - promptly went into the ITV Top 10, with the first two making it into the national Top 10.

This week came BBC1's response, arranged with all the scheduling skills of Michael Grade, the man whose previous television career was spent in commercial companies in Britain and the US, and who was brought into the BBC as controller of BBC1, now Director of Programmes for the whole of BBC television, partly because of his supposedly Machiavellian cunning with a scheduling graph.

ITV begins its Saturday "build" with The A-Team, that ultra-violent American gunplay series which is known to be particularly successful with children. So Grade has arranged for BBC1 to start its build just 15 minutes earlier with an asset lured (that is the polite word) away from ITV last year: Roland Rat. This puppet character in a blue denim cap and dark glasses, who speaks in the accents of a Cockney evacuee raised by Australians, now stars in Roland Rat - The Series.

The rat abdicates at 5.45 to be succeeded by Dr Who, a character pulled off screen by Grade when he first joined the BBC. For some reason television fantasy - especially space fantasy - induces greater dedication among its fans than any other type of programme (reactions to Star Trek and Blake's Seven confirm this) and there was a hurricane of protest when Grade stopped the doctor. After nearly 25 years the series maintained an extraordinary popularity and dropping it seemed a perverse move. But perhaps the idea was that absence would make the heart grow fonder and that the rest would make Dr Who an even bigger ratings attraction when he did return; such devious plotting would not be out of place in the Saturday evening battle. Anyway, the doctor is back.

He continues until 6.10 (with The A-Team still running on ITV) and is succeeded by a Noel Edmonds game show. This week it was Telly Addicts, next week it will be highlights from old episodes of The Late Late Breakfast Show, and next month Edmonds begins a new run of his series. His start time puts him just 20 minutes ahead of ITV's game show Blind Date, which is introduced by Cilla Black. When Edmonds finishes he hands over to Paul Daniels, conjuror turned telly "host," who fronts Every Second Counts, another game show.

"Common junctions" with programme start times coinciding on different channels so that viewers can comfortably switch from the end of a BBC programme to the start of a programme on ITV are, of course, anathema during this sort of ratings contest. Thus the Paul Daniels show runs on until 7.20 putting it five minutes beyond the start of ITV's popular series Copy Cats with its impressionists and comedians. Anyone watching BBC1 and contemplating switching over for Copy Cats will find at 7.20 that he might just as well stay where he is because BBC1 begins its own comedy in The Russ Abbot Show.

At 7.45, with five minutes still to go before the end of Abbot on BBC1, ITV starts 3-2-1, yet another game show. Five minutes later BBC1 switches to its new hospital saga, Casualty, which lasts 50 minutes and is succeeded by an old movie and then the news. ITV meanwhile offers the news, then the crime series Dempsey And Makepeace, and then an old movie.

There are four splendid ironies to be savoured with regard to this ratings battle, starting with the fact that it takes place on Saturday evening. For the BBC the day is immaterial. In order to maintain their claim on the licence fee they feel the need for a regular opportunity to prove that they can please the mass audience just as successfully as ITV does, and perhaps more so. But Saturday is the one day in the week which is not followed by a shopping day, making it the least attractive for many advertisers and thus the very last day that ITV would choose to do battle. Yet they find themselves obliged to respond to the BBC challenge.

The second irony concerns those earnest claims about public service ideals which we hear whenever the current British broadcasting system is brought into question - as it was for instance by the Peacock inquiry. Nowadays such claims come just as insistently from ITV as from the BBC. Yet when the chips are down as on Saturday night what do we find? The lightest of light entertainment. Drama series that make Barbara Cartland and Edgar Wallace look like intellectual giants. Moronic game shows not only from commercial television but from the BBC, and not just one at a time from the BBC but in pairs. Giving the public exactly what is wanted by its least demanding members may be a service of some kind, but it is not what most of us mean by "public service broadcasting."

The third irony, closely connected to the second, emerges when you consider the attitude of British broadcasters towards the efforts of their American colleagues and then observe what the British themselves provide on Saturday evenings. There are some British broadcasters who will acknowledge the professionalism and worldwide popularity of American programmes, but they are few and far between.

The very people who use such excellent series as Hill Street Blues, MASH, the Rockford Files, and Kojak (currently screened respectively by Channel 4, BBC2, BBC1 and ITV) to win audiences for their own channels, also express loathing and contempt for American television generally. It was the Director General of the BBC (which fought so tenaciously to keep Dallas for itself and stop ITV capturing it) who repeatedly used the words "Wall to wall Dallas" as a cautionary phrase to describe the supposed horrors of American programming.

Yet Britain's own Saturday night schedules look like nothing so much as second rate imitations of their American counterparts. Roland Rat - The Series is like a cheap and nasty copy of The Muppet Show, the telling difference being that when Kermit the frog promised star guests we actually got star guests, from Glenda Jackson to Elton John. When Roland the rat promised Sylvester Stallone this week it was merely a "joke." The British game shows lack the slickness and the prizes provided by their American originals. And the script editors on an American hospital drama such as St Elsewhere would die of shame before permitting the cliches and the predictable formulae of Casualty to reach the screen.

At ITV the story is the same only more so. The A-Team is actually imported from America. Blind Date was launched on American television in 1949, and Dempsey And Makepeace is a crime series which uses an American star (Michael Brandon) and American car (Oldsmobile) and American language ("She'll think you're with a hooker ... stoopid broad"). Unfortunately, being written in Britain, the scripts lack the tightness and polish which are achieved so consistently in America. Naturally the Saturday night movies on both BBC and ITV are American.

The fourth irony stems from the assumption upon which all this scheduling is based. It is no mere coincidence that The A-Team appeals as much to children as to adults, that the "children's" series Dr Who has featured a succession of nubile girl assistants, that Roland Rat - The Series combines animal puppets and a lissom troupe of girl dancers who bump and grind in suspenders and stockings, and that series such as Dempsey And Makepeace and Casualty are designed to appeal equally to men and women.

The assumption, dating from the 1950s and 1960s, is that early on Saturday evenings the audience is even more widely mixed than usual: men and women, grandparents and children, all watching together. No doubt there are still many homes where that is true, but there is no doubt either that the pattern is now changing faster than at any time since the start of television. Changes in family structures and, even more important, the rapid increase in multi-set homes and VCR ownership is ensuring that different members of the family watch only what each wants, so that the need for universal appeal is declining.

The greatest irony is that, with the broadcasters making ever more sophisticated refinements to their scheduling skills to attract family audiences, families are fragmenting into their constituent parts and taking command of scheduling for themselves.