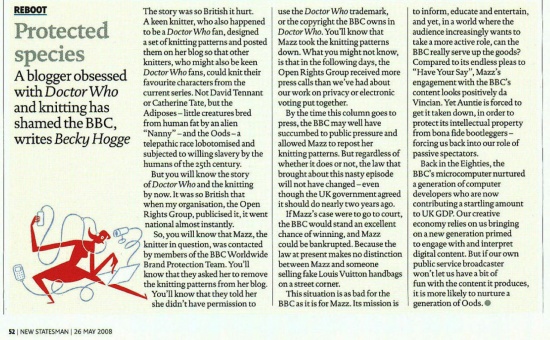 A blogger obsessed with Doctor Who and knitting has shamed the BBC, writes Becky Hogge

The story was so British it hurt. A keen knitter, who also happened to be a Doctor Who fan, designed a set of knitting patterns and posted them on her blog so that other knitters, who might also be keen Doctor Who fans, could knit their favourite characters from the current series. Not David Tennant or Catherine Tate, but the Adiposes - little creatures bred from human fat by an alien "Nanny" - and the Oods - a telepathic race lobotomised and subjected to willing slavery by the humans of the 25th century.

But you will know the story of Doctor Who and the knitting by now. It was so British that when my organisation, the Open Rights Group, publicised it, it went national almost instantly.

So, you will know that Mazz, the knitter in question, was contacted by members of the BBC Worldwide Brand Protection Team. You'll know that they asked her to remove the knitting patterns from her blog.

You'll know that they told her she didn't have permission to use the Doctor Who trademark, or the copyright the BBC owns in Doctor Who. You'll know that Mazz took the knitting patterns down. What you might not know, is that in the following days, the Open Rights Group received more press calls than we've had about our work on privacy or electronic voting put together.

By the time this column goes to press, the BBC may well have succumbed to public pressure and allowed Mazz to repost her knitting patterns. But regardless of whether it does or not, the law that brought about this nasty episode will not have changed - even though the UK government agreed it should do nearly two years ago.

If Mazz's case were to go to court, the BBC would stand an excellent chance of winning, and Mazz could be bankrupted. Because the law at present makes no distinction between Mazz and someone selling fake Louis Vuitton handbags on a street corner.

This situation is as bad for the BBC as it is for Mazz. Its mission is to inform, educate and entertain, and yet, in a world where the audience increasingly wants to take a more active role, can the BBC really serve up the goods? Compared to its endless pleas to "Have Your Say", Mazz's engagement with the BBC's content looks positively da Vincian. Yet Auntie is forced to get it taken down, in order to protect its intellectual property from bona fide bootleggers - forcing us back into our role of passive spectators.

Back in the Eighties, the BBC's microcomputer nurtured a generation of computer developers who are now contributing a startling amount to UK GDP. Our creative economy relies on us bringing on a new generation primed to engage with and interpret digital content. But if our own public service broadcaster won't let us have a bit of fun with the content it produces, it is more likely to nurture a generation of Oods.