Prydonians of Prynceton dedicated to enjoyment of low-budget Dr. Who 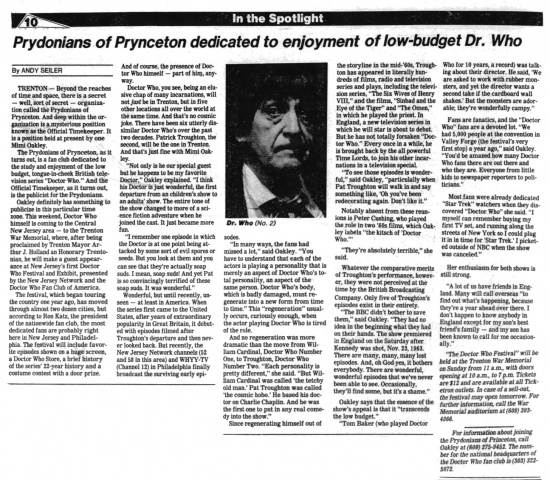 TRENTON — Beyond the reaches of time and space, there is a secret — well, sort of secret — organization called the Prydonians of Prynceton. And deep within the organization is a mysterious position known as the Official Timekeeper. It is a position held at present by one Mimi Oakley.

Oakley definitely has something to publicize in this particular time zone. This weekend, Doctor Who himself is coming to the Central New Jersey area — to the Trenton War Memorial, where, after being proclaimed by Trenton Mayor Arthur J. Holland an Honorary Trentonian, he will make a guest appearance at New Jersey's first Doctor Who Festival and Exhibit, presented by the New Jersey Network and the Doctor Who Fan Club of America.

The festival, which began touring the country one year ago, has moved through almost two dozen cities, but according to Ron Katz, the president of the nationwide fan club, the most dedicated fans are probably right here in New Jersey and Philadelphia. The festival will include favorite episodes shown on a huge screen, a Doctor Who Store, a brief history of the series' 22-year history and a costume contest with a door prize. And of course, the presence of Doctor Who himself — part of him, anyway.

Doctor Who, you see, being an elusive chap of many incarnations, will not just be in Trenton, but in five other locations all over the world at the same time. And that's no cosmic joke. There have been six utterly dissimilar Doctor Who's over the past two decades. Patrick Troughton, the second, will be the one in Trenton. And that's just fine with Mimi Oakley.

"Not only is he our special guest but he happens to be my favorite Doctor," Oakley explained. "I think his Doctor is just wonderful, the first departure from an children's show to an adults' show. The entire tone of the show changed to more of a science fiction adventure when he joined the cast. It just became more fun.

"I remember one episode in which the Doctor is at one point being attacked by some sort of evil spores or seeds. But you look at them and you can see that they're actually soap suds. I mean, soap suds! And yet Pat is so convincingly terrified of these soap suds. It was wonderful."

Wonderful, but until recently, unseen — at least in America. When the series first came to the United States, after years of extraordinary popularity in Great Britain, it debuted with episodes filmed after Troughton's departure and then never looked back. But recently, the New Jersey Network channels (52 and 58 in this area) and WHYY-TV (Channel 12) in Philadelphia finally broadcast the surviving early episodes.

"In many ways, the fans had missed a lot," said Oakley. "You have to understand that each of the actors is playing a personality that is merely an aspect of Doctor Who's total personality, an aspect of the same person. Doctor Who's body, which is badly damaged, must regenerate into a new form from time to time." This "regeneration" usually occurs, curiously enough, when the actor playing Doctor Who is tired of the role.

And no regeneration was more dramatic than the move from William Cardinal, Doctor Who Number One, to Troughton, Doctor Who Number Two. "Each personality is pretty different," she said. "But William Cardinal was called 'the tetchy old man.' Pat Troughton was called 'the cosmic hobo.' He based his doctor on Charlie Chaplin. And he was the first one to put in any real comedy into the show."

Since regenerating himself out of the storyline in the mid-'60s, Troughton has appeared in literally hundreds of films, radio and television series and plays, including the television series, "The Six Wives of Henry VIII," and the films, "Sinbad and the Eye of the Tiger" and "The Omen," in which he played the priest. In England, a new television series in which he will star is about to debut. But he has not totally forsaken "Doctor Who." Every once in a while, he is brought back by the all powerful Time Lords, to join his other incarnations in a television special.

"To see those episodes is wonderful," said Oakley, "particulally when Pat Troughton will walk in and say something like, 'Oh you've been redecorating again. Don't like it."

Notably absent from these reunions is Peter Cushing, who played the role in two '60s films, which Oakley labels "the kitsch of 'Doctor Who."

"They're absolutely terrible," she said.

Whatever the comparative merits of Troughton's performance, however, they were not perceived at the time by the British Broadcasting Company. Only five of Troughton's episodes exist in their entirety.

"The BBC didn't bother to save them," said Oakley. "They had no idea in the beginning what they had on their hands. The show premiered in England on the Saturday after Kennedy was shot, Nov. 23, 1963. There are many, many, many lost episodes. And, oh God yes, it bothers everybody. There are wonderful, wonderful episodes that we've never been able to see. Occasionally, they'll find some, but it's a shame."

Oakley says that the essence of the show's appeal is that it "transcends the low budget."

"Tom Baker (who played Doctor Who for 10 years, a record) was talking about their director. He said, 'We are asked to work with rubber monsters, and yet the director wants a second take if the cardboard wall shakes.' But the monsters are adorable; they're wonderfully campy."

Fans are fanatics, and the "Doctor Who" fans are a devoted lot. "We had 5,000 people at the convention in Valley Forge (the festival's very first stop) a year ago," said Oakley. "You'd be amazed how many Doctor Who fans there are out there and who they are. Everyone from little kids to newspaper reporters to politicians."

Most fans were already dedicated "Star Trek" watchers when they discovered "Doctor Who" she said. "I myself can remember buying my first TV set, and running along the streets of New York so I could plug it in in time for 'Star Trek.' I picketed outside of NBC when the show was canceled."

Her enthusiasm for both shows is still strong.

"A lot of us have friends in England. Many will call overseas "to find out what's happening, because they're a year ahead over there. I don't happen to know anybody in England except for my son's best friend's family — and my son has been known to call for me occasionally."

"The Doctor Who Festival" will be held at the Trenton War Memorial on Sunday from 11 a.m., with doors opening at 10 a.m., to 7 p.m. Tickets are $12 and are available at all Ticketron outlets. In case of a sell-out, the festival may open tomorrow. For further information, call the War Memorial auditorium at (609) 393-4866.