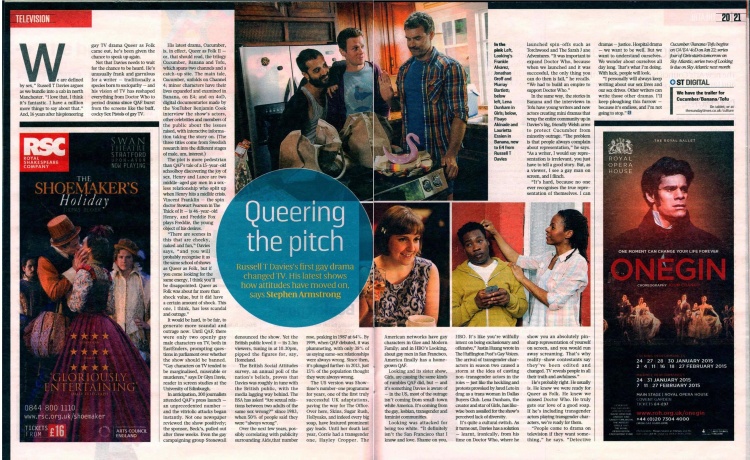 We are defined by sex," Russell T Davies argues as we bundle into a cab in north Manchester. "I love that, I think it's fantastic. I have a million more things to say about that." And, 16 years after his pioneering gay TV drama Queer as Folk came out, he's been given the chance to speak up again.

Not that Davies needs to wait for the chance to be heard. He's unusually frank and garrulous for a writer — traditionally a species born to sociopathy — and his vision of TV has reshaped everything from Doctor Who to period drama since QAF burst from the screens like the buff, cocky Sex Pistols of gay TV.

His latest drama, Cucumber, is, in effect, Queer as Folk II —or, that should read, the trilogy Cucumber, Banana and Tofu, which spans two channels and a catch-up site. The main tale, Cucumber, unfolds on Channel 4; minor characters have their lives expanded and examined in Banana, on E4; and on 4oD, digital documentaries made by the YouTuber Benjamin Cook interview the show's actors, other celebrities and members of the public about the issues raised, with interactive information taking the story on. (The three titles come from Swedish research into the different stages of male, urn, interest.)

The plot is more pedestrian than QAF's tale of a 15-year-old schoolboy discovering the joy of sex. Henry and Lance are two middle-aged gay men in a sexless relationship who split up when Henry hits a midlife crisis. Vincent Franklin — the spin doctor Stewart Pearson in The Mick of It — is 46-year-old Henry, and Freddie Fox plays Freddie, the young object of his desires.

"There are scenes in this that are cheeky, naked and fun," Davies says, "and you will probably recognise it as the same school of shows as Queer as Folk, but if you come looking for the same energy, I think you'll be disappointed. Queer as Folk was about far more than shock value, but it did have a certain amount of shock. This one, I think, has less scandal and outrage."

It would be hard, to be fair, to generate more scandal and outrage now. Until QAF, there were only two openly gay male characters on TV, both in EastEnders, prompting questions in parliament over whether the show should be banned. "Gay characters on TV tended to be marginalised, miserable or murderers," says Dr Glyn Davis, reader in screen studies at the University of Edinburgh.

In anticipation, 200 journalists attended QAF's press launch —an unprecedented number —and the vitriolic attacks began instantly. Not one newspaper reviewed the show positively; the sponsor, Beck's, pulled out after three weeks. Even the gay campaigning group Stonewall denounced the show. Yet the British public loved it — its 2.3m viewers, tuning in at 10.30pm, pipped the figures for, say, Homeland.

The British Social Attitudes survey, an annual poll of the nation's beliefs, proves that Davies was roughly in tune with the British public, with the media lagging way behind. The BSA has asked "Are sexual relations between two adults of the same sex wrong?" since 1983, when 50% of people said they were "always wrong".

Over the next few years, possibly correlating with publicity surrounding Aids, that number rose, peaking in 1987 at 64%. By 1999, when QAF debuted, it was plummeting, with only 38% of us saying same-sex relationships were always wrong. Since then, it's plunged further: in 2013, just 15% of the population thought they were always wrong.

The US version was Show-time's number-one programme for years, one of the first truly successful UK adaptations, paving the way for The Office. Over here, Skins, Sugar Rush, Hollyoaks, and indeed every big soap, have featured prominent gay leads. Until her death last year, Corrie had a transgender one, Hayley Cropper. The American networks have gay characters in Glee and Modern Family; and in HBO's Looking, about gay men in San Francisco, America finally has a homegrown QAF.

Looking and its sister show, Girls, are causing the same kinds of rumbles QAF did, but — and it's something Davies is aware of — in the US, most of the outrage isn't coming from small-town white America. It's coming from the gay, lesbian, transgender and feminist communities.

Looking was attacked for being too white. "It definitely isn't the San Francisco that I know and love. Shame on you, I IBO. It's like you're wilfully intent on being exclusionary and offensive," Justin Huang wrote in The Huffington Post's Gay Voices. The arrival of transgender characters in season two caused a storm at the idea of casting non-transgender actors in the roles — just like the heckling and protests provoked by Jared Leto in drag as a trans woman in Dallas Buyers Club. Lena Dunham, the creator and star of Girls, has likewise been assailed for the show's perceived lack of diversity.

It's quite a cultural switch. As it turns out, Davies has a solution — learnt, ironically, from his time on Doctor Who, where he launched spin-offs such as Torchwood and The Sarah Jane Adventures. "It was important to expand Doctor Who, because when we launched and it was successful, the only thing you can do then is fail," he recalls. "We had to build an empire to support Doctor Who."

In the same way, the stories in Banana and the interviews in Tofu have young writers and new actors creating mini dramas that wrap the entire community up in Davies's big, friendly Welsh arms to protect Cucumber from minority outrage. "The problem is that people always complain about representation," he says. "As a writer, I would say representation is irrelevant, you just have to tell a good story. But, as a viewer, I see a gay man on screen, and I flinch.

"It's hard, because no one ever recognises the true representation of themselves. I can show you an absolutely pin-sharp representation of yourself on screen, and you would run away screaming. That's why reality-show contestants say they've been edited and changed. TV reveals people in all their truth and awfulness."

"People come to drama on television if they want something," he says. "Detective dramas — justice. Hospital drama — we want to be well. But we want to understand ourselves. We wonder about ourselves all day long. That's what I'm doing. With luck, people will look.

"I personally will always keep writing about our sex lives and our sex drives. Other writers can write those other dramas. I'll keep ploughing this furrow —because it's endless, and I'm not going to stop." 13

Cucumber/Banana/Tofu begins on C4 /E4 / 4oD on Jan 22; series four of Girls starts tomorrow on Sky Atlantic; series two of Looking is due on Sky Atlantic next month