Reality, what a concept for Who 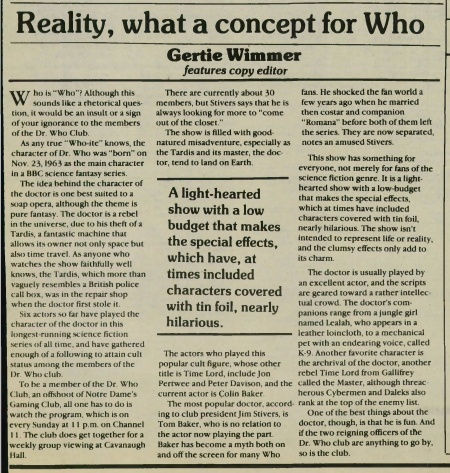 Who is "Who"? Although this sounds like a rhetorical question, it would be an insult or a sign of your ignorance to the members of the Dr. Who Club.

The idea behind the character of the doctor is one best suited to a soap opera, although the theme is pure fantasy. The doctor is a rebel in the universe, due to his theft of a Tardis, a fantastic machine that allows its owner not only space but also time travel. As anyone who watches the show faithfully well knows, the Tardis, which more than vaguely resembles a British police call box, was in the repair shop when the doctor first stole it.

Six actors so far have played the character of the doctor in this longest-running science fiction series of all time, and have gathered enough of a following to attain cult status among the members of the Dr. Who club.

To be a member of the Dr. Who Club, an offshoot of Notre Dame's Gaming Club, all one has to do is watch the program, which is on every Sunday at 11 p.m. on Channel 11. The club does get together for a weekly group viewing at Cavanaugh Hall.

There are currently about 30 members, but Stivers says that he is always looking for more to "come out of the closet."

The show is filled with good-natured misadventure, especially as the Tardis and its master, the doctor, tend to land on Earth.

The actors who played this popular cult figure, whose other title is Time Lord, include Jon Pertwee and Peter Davison, and the current actor is Colin Baker.

The most popular doctor, according to club president Jim Stivers, is Tom Baker, who is no relation to the actor now playing the part. Baker has become a myth both on and off the screen for many Who fans. He shocked the fan world a few years ago when he married then costar and companion "Romana" before both of them left the series. They are now separated, notes an amused Stivers.

This show has something for everyone, not merely for fans of the science fiction genre. It is a lighthearted show with a low-budget that makes the special effects, which at times have included characters covered with tin foil, nearly hilarious. The show isn't intended to represent life or reality, and the clumsy effects only add to its charm.

The doctor is usually played by an excellent actor, and the scripts are geared toward a rather intellectual crowd. The doctor's companions range from a jungle girl named Lealah, who appears in a leather loincloth, to a mechanical pet with an endearing voice, called K-9. Another favorite character is the archrival of the doctor, another rebel Time Lord from Gallifrey called the Master, although threacherous Cybermen and Daleks also rank at the top of the enemy list.

One of the best things about the doctor, though, is that he is fun. And if the two reigning officers of the Dr. Who club are anything to go by, so is the club.