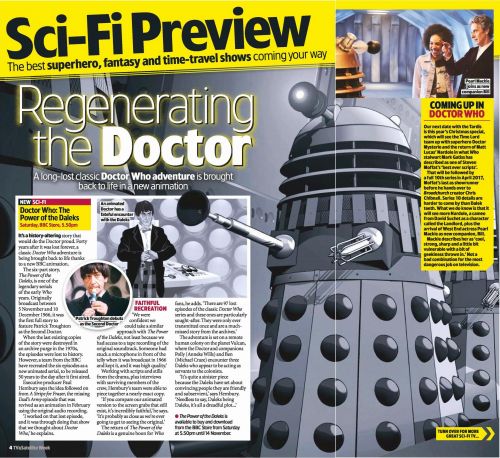 It's a history-altering story that would do the Doctor proud. Forty years after it was lost forever, a classic Doctor Who adventure is being brought back t to a new BBC animation.

The six-part story, The Power of the Daleks, is one of the legendary serials of the early Who years. Originally broadcast between 5 November and 10 December 1966, it was the first full story to feature Patrick Troughton as the Second Doctor.

When the last existing copies of the story were destroyed in an archive purge in the 1970s, the episodes were lost to history. However, a team from the BBC have recreated the six episodes as a new animated serial, to be released 50 years to the day after it first aired.

Executive producer Paul Hembury says the idea followed on from A Stripe for Frazer, the missing Dad's Army episode that was revived as an animation in February using the original audio recording.

'I worked on that lost episode, and it was through doing that show that we thought about Doctor Who,' he explains.

'We were confident we could take a similar approach with The Power of the Daleks, not least because we had access to a tape recording of the original soundtrack. Someone had stuck a microphone in front of the telly when it was broadcast in 1966 and kept it, and it was high quality.'

Working with scripts and stills from the drama, plus interviews with surviving members of the crew, Hembury's team were able to piece together a nearly exact copy.

'If you compare our animated version to the screen grabs that still exist, it's incredibly faithful,' he says. 'It's probably as close as we're ever going to get to seeing the original.'

The return of The Power of the Daleks is a genuine boon for Who fans, he adds. 'There are 97 lost episodes of the classic Doctor Who series and these ones are particularly sought-after. They were only ever transmitted once and are a much-missed story from the archives.'

The adventure is set on a remote human colony on the planet Vulcan, where the Doctor and companions Polly (Anneke Wills) and Ben (Michael Craze) encounter three Daleks who appear to be acting as servants to the colonists.

'It's quite a sinister piece because the Daleks have set about convincing people they are friendly and subservient,' says Hembury. 'Needless to say, Daleks being Daleks, it's all a dreadful plot...'

The Power of the Daleks is available to buy and download from the BBC Store from Saturday at 5.50pm until 14 November.

Caption: An animated Doctor has a fateful encounter with the Daleks

COMING UP IN DOCTOR WHO

Our next date with the Tardis is this year's Christmas special, which will see the Time Lord team up with superhero Doctor Mysterio and the return of Matt Lucas' Nardole in what Who stalwart Mark Gatiss has described as one of Steven Moffat's 'best ever scripts'.

That will be followed by a full 10th series in April 2017, Moffat's last as showrunner before he hands over to Broadchurch creator Chris Chibnall. Series 10 details are harder to come by than Dalek teeth. What we do know is that it will see more Nardole, a cameo from David Suchet as a character called the Landlord, plus the arrival of West End actress Pearl Mackie as new companion, Bill.

Mackie describes her as 'cool, strong, sharp and a little bit vulnerable with a bit of geekiness thrown in.' Not a bad combination for the most dangerous job on television.