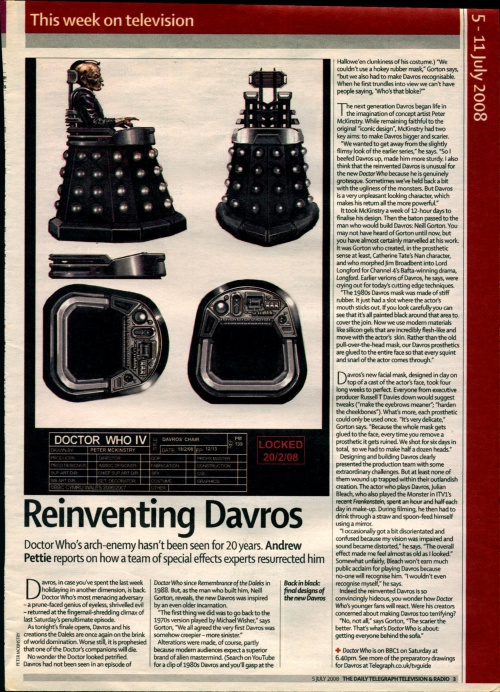 Doctor Who's arch-enemy hasn't been seen for 20 years. Andrew Pettie reports on how a team of special effects experts resurrected him

Davros, in case you've spent the last week holidaying in another dimension, is back. Doctor Who's most menacing adversary - a prune-faced genius of eyeless, shrivelled evil - returned at the fingernail-shredding climax of last Saturday's penultimate episode.

As tonight's finale opens, Davros and his creations the Daleks are once again on the brink i of world domination. Worse still, it is prophesied that one of the Doctor's companions will die.

No wonder the Doctor looked petrified. Davros had not been seen in an episode of Doctor Who since Remembrance of the Daleks in 1988. But, as the man who built him, Neill Gorton, reveals, the new Davros was inspired by an even older incarnation.

"The first thing we did was to go back to the 1970s version played by Michael Wisher," says Gorton, "We all agreed the very first Davros was somehow creepier - more sinister."

Alterations were made, of course, partly because modern audiences expect a superior brand of alien mastermind. (Search on YouTube for a clip of 1980s Davros and you'll gasp at the Hallowe'en clunkiness of his costume.) "We couldn't use a hokey rubber mask," Gorton says, "but we also had to make Davros recognisable. When he first trundles into view we can't have people saying, 'Who's that bloke?'"

The next generation Davros began life in I the imagination of concept artist Peter McKinstry. While remaining faithful to the original "iconic design", McKinstry had two key aims: to make Davros bigger and scarier.

"We wanted to get away from the slightly flimsy look of the earlier series," he says. "So I beefed Davros up, made him more sturdy. I also think that the reinvented Davros is unusual for the new Doctor Who because he is genuinely grotesque. Sometimes we've held back a bit with the ugliness of the monsters. But Davros is a very unpleasant looking character, which makes his return all the more powerful."

It took McKinstry a week of 12-hour days to finalise his design. Then the baton passed to the man who would build Davros: Neill Gorton. You may not have heard of Gorton until now, but you have almost certainly marvelled at his work. It was Gorton who created, in the prosthetic sense at least, Catherine Tate's Nan character, and who morphed Jim Broadbent into Lord Longford for Channel 4's Bafta-winning drama, Longford. Earlier verions of Davros, he says, were crying out for today's cutting edge techniques.

"The 1980s Davros mask was made of stiff rubber. It just had a slot where the actor's mouth sticks out. If you look carefully you can see that it's all painted black around that area to cover the join. Now we use modern materials like silicon gels that are incredibly flesh-like and move with the actor's skin. Rather than the old pull-over-the-head mask, our Davros prosthetics are glued to the entire face so that every squint and snarl of the actor comes through."

Davros's new facial mask, designed in clay on top of a cast of the actor's face, took four long weeks to perfect. Everyone from executive producer Russell T Davies down would suggest tweaks ("make the eyebrows meaner"; "harden the cheekbones"). What's more, each prosthetic could only be used once. "It's very delicate," Gorton says. "Because the whole mask gets glued to the face, every time you remove a prosthetic it gets ruined. We shot for six days in total, so we had to make half a dozen heads."

Designing and building Davros clearly presented the production team with some extraordinary challenges. But at least none of them wound up trapped within their outlandish creation. The actor who plays Davros, Julian Bleach, who also played the Monster in ITV1's recent Frankenstein, spent an hour and half each day in make-up. During filming, he then had to drink through a straw and spoon-feed himself using a mirror.

"I occasionally got a bit disorientated and confused because my vision was impaired and sound became distorted," he says. "The overall effect made me feel almost as old as I looked." Somewhat unfairly, Bleach won't earn much public acclaim for playing Davros because no-one will recognise him. "I wouldn't even recognise myself," he says.

Indeed the reinvented Davros is so convincingly hideous, you wonder how Doc-tor Who's younger fans will react. Were his creators concerned about making Davros too terrifying? "No, not all," says Gorton, "The scarier the better. That's what's Doctor Who is about: getting everyone behind the sofa."

Doctor Who is on BBC1 on Saturday at 6.40pm. See more of the preparatory drawings for Davros at

Caption: Back in black: final designs of the new Davros