Return of The Daemon 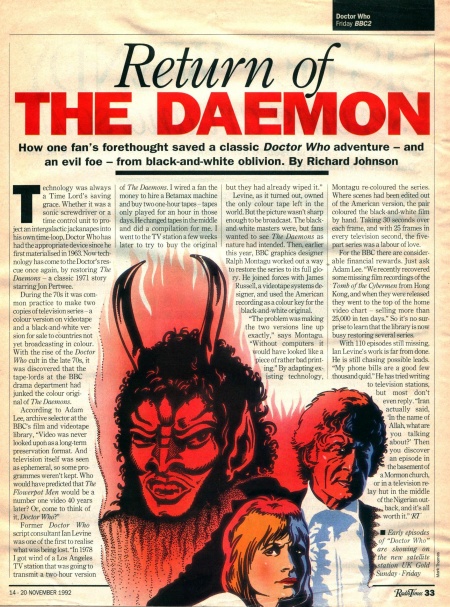 Technology was always a Time Lord's saving grace. Whether it was a sonic screwdriver or a time control unit to project an intergalactic jackanapes into his own time-loop, Doctor Who has had the appropriate device since he first materialised in 1963. Now technology has come to the Doctor's rescue once again, by restoring The Daemons — a classic 1971 story starring Jon Pertwee.

During the 70s it was common practice to make two copies of television series — a colour version on videotape and a black-and-white version for sale to countries not yet broadcasting in colour. With the rise of the Doctor Who cult in the late 70s, it was discovered that the tape-lords at the BBC drama department had junked the colour original of The Daemons.

According to Adam Lee, archive selector at the BBC's film and videotape library, "Video was never looked upon as a long-term preservation format. And television itself was seen as ephemeral, so some programmes weren't kept. Who would have predicted that The Flowerpot Men would be a number one video 40 years later? Or, come to think of it, Doctor Who?"

Former Doctor Who script consultant Ian Levine was one of the first to realise what was being lost. "In 1978 I got wind of a Los Angeles TV station that was going to transmit a two-hour version of The Daemons. I wired a fan the money to hire a Betamax machine and buy two one-hour tapes — tapes only played for an hour in those days. He changed tapes in the middle and did a compilation for me. I went to the TV station a few weeks later to try to buy the original but they had already wiped it."

Levine, as it turned out, owned the only colour tape left in the world. But the picture wasn't sharp enough to be broadcast. The black-and-white masters were, but fans wanted to see The Daemons as nature had intended. Then, earlier this year, BBC graphics designer Ralph Montagu worked out a way to restore the series to its full glory. He joined forces with James Russell, a videotape systems designer, and used the American recording as a colour key for the black-and-white original.

"The problem was making the two versions line up exactly," says Montagu. "Without computers it would have looked like a piece of rather bad printing." By adapting existing technology, Montagu re-coloured the series. Where scenes had been edited out of the American version, the pair coloured the black-and-white film by hand. Taking 30 seconds over each frame, and with 25 frames in every television second, the five-part series was a labour of love.

For the BBC there are considerable financial rewards. Just ask Adam Lee. "We recently recovered some missing film recordings of the Tomb of the Cybermen from Hong Kong, and when they were released they went to the top of the home video chart — selling more than 25,000 in ten days." So it's no surprise to learn that the library is now busy restoring several series.

With 110 episodes still missing, Ian Levine's work is far from done. He is still chasing possible leads. "My phone bills are a good few thousand quid." He has tried writing to television stations, but most don't even reply. "Iran actually said, 'In the name of Allah, what are you talking about?' Then you discover an episode in the basement of a Mormon church, or in a television relay hut in the middle of the Nigerian outback, and it's all worth it."