Return of the Cybermen 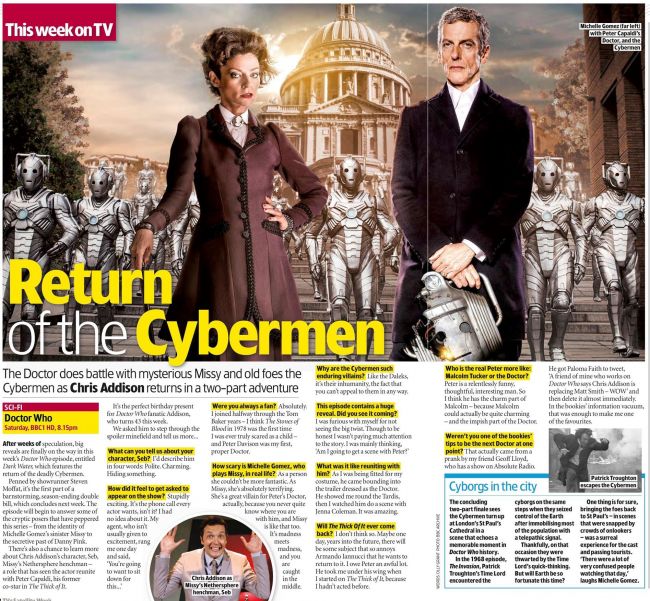 After weeks of speculation, big reveals are finally on the way in this week's Doctor Who episode, entitled Dark Water, which features the return of the deadly Cybermen.

Penned by showrunner Steven Moffat, it's the first part of a barnstorming, season-ending double bill, which concludes next week. The episode will begin to answer some of the cryptic posers that have peppered this series — from the identity of Michelle Gomez's sinister Missy to the secretive past of Danny Pink.

There's also a chance to learn more about Chris Addison's character, Seb, Missy's Nethersphere henchman — a role that has seen the actor reunite with Peter Capaldi, his former co-star in The Thick of It.

It's the perfect birthday present for Doctor Who fanatic Addison, who turns 43 this week.

We asked him to step through the spoiler minefield and tell us more...

What can you tell us about your character, Seb?

I'd describe him in four words: Polite. Charming. Hiding something.

How did it feel to get asked to appear on the show?

Stupidly exciting. It's the phone call every actor wants, isn't it? I had no idea about it. My agent, who isn't usually given to excitement, rang me one day and said, 'You're going to want to sit down for this...'

Were you always a fan? Absolutely.

I joined halfway through the Tom Baker years — I think The Stones of Blood in 1978 was the first time I was ever truly scared as a child — and Peter Davison was my first, proper Doctor.

How scary is Michelle Gomez, who plays Missy, in real life?

As a person she couldn't be more fantastic. As Missy, she's absolutely terrifying. She's a great villain for Peter's Doctor, actually, because you never quite know where you are with him, and Missy is like that too. It's madness meets madness, and you are caught in the middle.

Why are the Cybermen such enduring villains?

Like the Daleks, it's their inhumanity, the fact that you can't appeal to them in any way.

This episode contains a huge reveal. Did you see it coming?

I was furious with myself for not seeing the big twist. Though to be honest I wasn't paying much attention to the story. I was mainly thinking, 'Am I going to get a scene with Peter?'

As I was being fitted for my costume, he came bounding into the trailer dressed as the Doctor. He showed me round the Tardis, then I watched him do a scene with Jenna Coleman. It was amazing.

Will The Thick Of It ever come back?

I don't think so. Maybe one day, years into the future, there will be some subject that so annoys Armando Iannucci that he wants to return to it. I owe Peter an awful lot. He took me under his wing when I started on The Thick of It, because I hadn't acted before.

Who is the real Peter more like: Malcolm Tucker or the Doctor?

Peter is a relentlessly funny, thoughtful, interesting man. So I think he has the charm part of Malcolm — because Malcolm could actually be quite charming — and the impish part of the Doctor.

Weren't you one of the bookies' tips to be the next Doctor at one point?

That actually came from a prank by my friend Geoff Lloyd, who has a show on Absolute Radio.

He got Paloma Faith to tweet, 'A friend of mine who works on Doctor Who says Chris Addison is replacing Matt Smith—WOW' and then delete it almost immediately. In the bookies' information vacuum, that was enough to make me one of the favourites.

Cyborgs in the city

The concluding two-part finale sees the Cybermen turn up at London's St Paul's Cathedral in a scene that echoes a memorable moment in Doctor Who history.

In the 1968 episode, The Invasion, Patrick Troughton's Time Lord encountered the cyborgs on the same steps when they seized control of the Earth after immobilising most of the population with a telepathic signal.

Thankfully, on that occasion they were thwarted by the Time Lord's quick-thinking. But will Earth be so fortunate this time?

One thing is for sure, bringing the foes back to St Paul's — in scenes that were snapped by crowds of onlookers — was a surreal experience for the cast and passing tourists. 'There were a lot of very confused people watching that day,' laughs Michelle Gomez.