Return of the Tardis 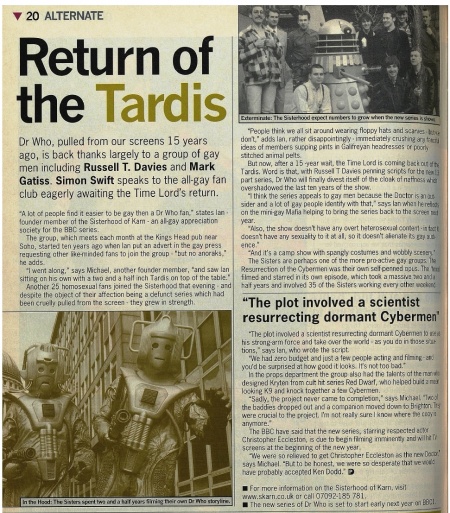 Dr Who, pulled from our screens 15 years ago, is back thanks largely to a group of gay men including Russell T. Davies and Mark Gatiss. Simon Swift speaks to the all-gay fan club eagerly awaiting the Time Lord's return.

"A lot of people find it easier to be gay then a Dr Who fan," states Ian founder member of the Sisterhood of Karn - an all-gay appreciation society for the BBC series.

The group, which meets each month at the Kings Head pub near Soho, started ten years ago when Ian put an advert in the gay press requesting other like-minded fans to join the group - "but no anoraks," he adds.

"I went along," says Michael, another founder member, "and saw Ian sitting on his own with a two and a half inch Tardis on top of the table."

Another 25 homosexual fans joined the Sisterhood that evening - and despite the object of their affection being a defunct series which had been cruelly pulled from the screen - they grew in strength.

But now, after a 15 -year wait, the Time Lord is coming back out of the Tardis. Word is that, with Russell T Davies penning scripts for the new 13 part series, Dr Who will finally divest itself of the cloak of naffness which overshadowed the last ten years of the show.

and a lot of gay people identify with that," says Ian when he reflects on the mini-gay Mafia helping to bring the series back to the screen next year.

"And it's a camp show with spangly costumes and wobbly scenery."

The Sisters are perhaps one of the more proactive gay groups. The Resurrection of the Cybermen was their own self-penned opus. The 'hood filmed and starred in its own episode, which took a massive two and a half years and involved 35 of the Sisters working every other weekend.

"The plot involved a scientist resurrecting dormant Cybermen to use as his strong-arm force and take over the world - as you do in those situations," says Ian, who wrote the script.

"We had zero budget and just a few people acting and filming - and you'd be surprised at how good it looks. It's not too bad." In the props department the group also had the talents of the man who designed Kryten from cult hit series Red Dwarf, who helped build a mean looking K9 and knock together a few Cybermen.

"Sadly, the project never came to completion," says Michael. "Two of the baddies dropped out and a companion moved down to Brighton. They were crucial to the project. I'm not really sure I know where the copy is anymore."

The BBC have said that the new series, starring respected actor Christopher Eccleston, is due to begin filming imminently and will hit TV screens at the beginning of the new year.

'We were so relieved to get Christopher Eccleston as the new Doctor' says Michael. "But to be honest, we were so desperate that we would have probably accepted Ken Dodd."

The new series of Dr Who is set to start early next year on BBC1.

Caption: In the Hood: The Sisters spent two and a half years filming their own Dr Who storyline.

Caption: Exterminate: The Sisterhood expect numbers to grow when the new series is shown.