Robots from another planet 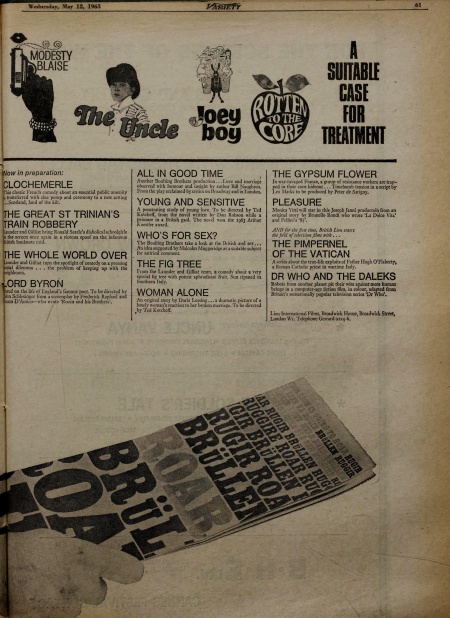 This classic French comedy about an essential public amenity is transferred with due pomp and ceremony to a new setting Scotland, land of the kilt.

Launder and Gilliat bring Ronald Searle's diabolical schoolgirls to the screen once again in a riotous spoof on the infamous British banknote raid.

THE WHOLE WORLD OVER

Lunder and Gilliat turn the spotlight of comedy on a pressing social dilemma ... the problem of keeping up with the neighbours.

Based on the lite of England's famous poet. To be directed by John Schlesinger from a screenplay by Frederick Raphael and use Souso D'Amico—who wrote 'Rocco and his Brothers'.

ALL IN GOOD TIME

Another Boulting Brothers production... Love and marriage observed with humour and insight by author Bill Naughton, From the play acclaimed by critics on Broadway and in London.

A penetrating study of young love. To be directed by Ted Kotcheff, from the novel written by Don Robson while a prisoner in a British gaol. The novel won the 1963 Arthur Koestler award.

The Boulting Brothers take a look at the British and sex ... An idea suggested by Malcolm Muggeridge as a suitable subject for satirical comment.

An original story by Doris Lessing ... a dramatic picture of a lonely woman's reaction to her broken marriage. To be directed ..by Ted Kotcheff.

In war-ravaged France, a group of resistance workers are trapped in their cave hideout ... Timebomb tension in a script by Leo Marks to be produced by Peter de Sarigny.

Monica Vial will star in this Joseph Janni productoin from an original story by Brunelle, Rondi who wrote 'La Dolce Vita' and Fellini's '8½'

AND for the first time, British Lion enters the field of television films with ...

THE PIMPERNEL OF THE VATICAN

A series about the true-life exploits of Father Hugh O'Flaherty, a Roman Catholic priest in wartime Italy.

DR WHO AND THE DALEKS

Robots from another planet pit their wits against mere human beings in a computer-age fiction film, in colour, adapted from Britain's sensationally popular television series 'Dr Who'.