Running off with Dr Who ... am I bovvered? 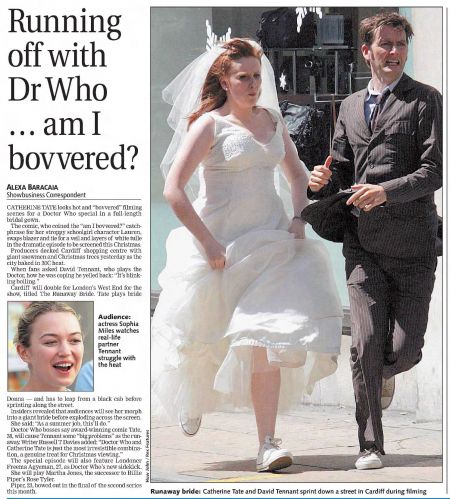 CATHERINE TATE looks hot and "bovvered" filming scenes for a Doctor Who special in a full-length bridal gown.

The comic, who coined the "am I bovvered?" catch-phrase for her stroppy schoolgirl character Lauren, swaps blazer and tie for a veil and layers of white tulle in the dramatic episode to be screened this Christmas. Producers decked Cardiff shopping centre with giant snowmen and Christmas trees yesterday as the city baked in 30C heat.

When fans asked David Tennant, who plays the Doctor, how he was coping he yelled back: "It's blinking boiling."

Donna — and has to leap from a black cab before sprinting along the street.

Insiders revealed that audiences will see her morph into a giant bride before exploding across the screen. She said: "As a summer job, this'll do."

Doctor Who bosses say award-winning comic Tate, 38, will cause Tennant some "big problems" as the runaway. Writer Russell T Davies added: "Doctor Who and Catherine Tate is just the most irresistible combination, a genuine treat for Christmas viewing."

The special episode will also feature Londoner Freema Agyeman, 27, as Doctor Who's new sidekick. She will play Martha Jones, the successor to Billie Piper's Rose Tyler.

Piper, 23, bowed out in the final of the second series this month.

Caption: Runaway bride: Catherine Tate and David Tennant sprint down a street in Cardiff during filming