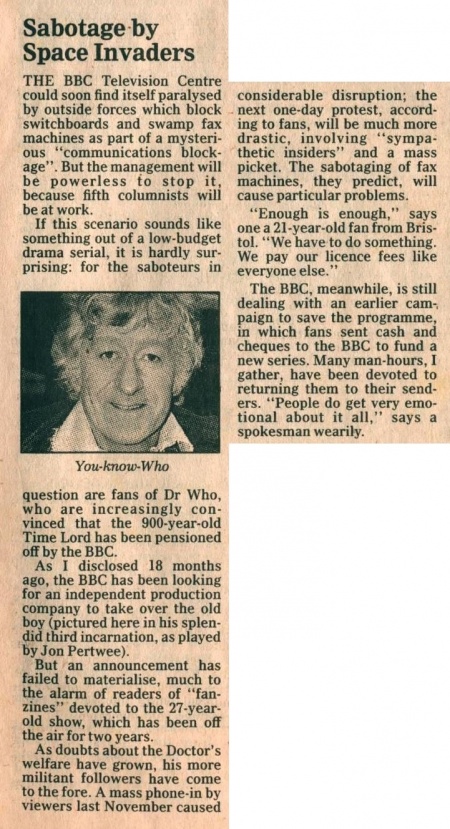 THE BBC Television Centre could soon find itself paralysed by outside forces which block switchboards and swamp fax machines as part of a mysterious "communications blockage". But the management will be powerless to stop it, because fifth columnists will be at work.

If this scenario sounds like something out of a low-budget drama serial, it is hardly surprising: for the saboteurs in question are fans of Dr Who, who are increasingly convinced that the 900-year-old Time Lord has been pensioned off by the BBC.

As I disclosed 18 months ago, the BBC has been looking for an independent production company to take over the old boy (pictured here in his splendid third incarnation, as played by Jon Pertwee).

But an announcement has failed to materialise, much to the alarm of readers of "fanzines" devoted to the 27-year-old show, which has been off the air for two years.

As doubts about the Doctor's welfare have grown, his more militant followers have come to the fore. A mass phone-in by viewers last November caused considerable disruption; the next one-day protest, according to fans, will be much more drastic, involving "sympathetic insiders" and a mass picket. The sabotaging of fax machines, they predict, will cause particular problems.

"Enough is enough," says one a 21-year-old fan from Bristol. "We have to do something. We pay our licence fees like everyone else."

The BBC, meanwhile, is still dealing with an earlier campaign to save the programme, in which fans sent cash and cheques to the BBC to fund a new series. Many man-hours, I gather, have been devoted to returning them to their senders. "People do get very emotional about it all," says a spokesman wearily.