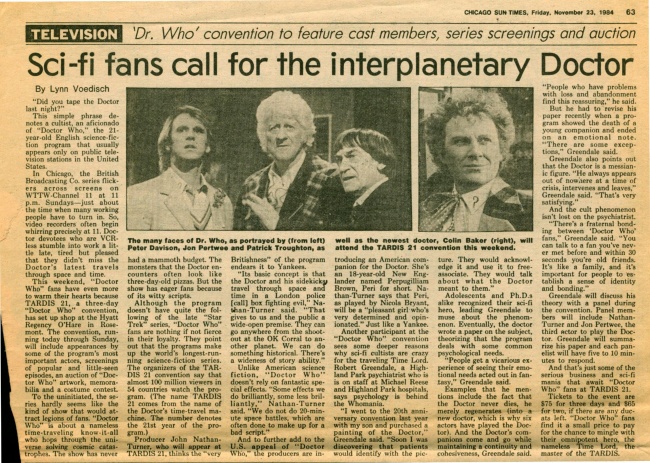 "Did you tape the Doctor last night?"

This simple phrase denotes a cultist, an aficionado of "Doctor Who," the 21-year-old English science-fiction program that usually appears only on public television stations in the United States.

In Chicago, the British Broadcasting Co. series flickers across screens on WTTW-Channel 11 at 11 p.m. Sundays—just about the time when many working people have to turn in. So, video recorders often begin whirring precisely at 11. Doctor devotees who are VCR-less stumble into work a little late, tired but pleased that they didn't miss the Doctor's latest travels through space and time.

This weekend, "Doctor Who" fans have even more to warm their hearts because TARDIS 21, a three-day "Doctor Who" convention, has set up shop at the Hyatt Regency O'Hare in Rosemont. The convention, running today through Sunday, will include appearances by some of the program's most important actors, screenings of popular and little-seen episodes, an auction of "Doctor Who" artwork, memorabilia and a costume contest.

To the uninitiated, the series hardly seems like the kind of show that would attract legions of fans. "Doctor Who" is about a nameless time-traveling know-it-all who hops through the universe solving cosmic catastrophes. The show has never had a mammoth budget. The monsters that the Doctor encounters often look like three-day-old pizzas. But the show has eager fans because of its witty scripts.

Although the program doesn't have quite the following. of the late "Star Trek" series, "Doctor Who" fans are nothing if not fierce. in their loyalty. They point out that the programs make up the world's longest-running science-fiction series. The organizers of the TARDIS 21 convention say that almost 100 million viewers in 54 countries watch the program. (The name TARDIS 21 comes from the name of the Doctor's time-travel machine. The number denotes the 21st year of the program.)

Producer John Nathan Turner, who will appear at TARDIS 21, thinks the "very Britishness" of the program endears it to Yankees.

"Its basic concept is that the Doctor and his sidekicks travel through space and time in a London police [call] box fighting evil," Nathan-Turner said. "That. gives to us and the public a wide-open premise. They can go anywhere from the shoot-out at the OK Corral to another planet. We can do something historical. There's a wideness of story ability."

Unlike American science fiction, "Doctor Who" doesn't rely on fantastic special effects. "Some effects we do brilliantly, some less brilliantly," Nathan-Turner said. "We do not do 20-minute space battles, which are often done to make up for a bad script."

And to further add to the U.S. appeal of "Doctor Who," the producers are introducing. an American companion for the Doctor. She's an 18-year-old New Englander named Perpugilliam Brown, Peri for short. Nathan-Turner says that Peri, as played by Nicola Bryant, will be a "pleasant girl who's very determined and opinionated." Just like a Yankee.

Another participant at the "Doctor. Who" convention sees some deeper reasons why sci-fi cultists are crazy for the traveling Time Lord. Robert Greendale, a Highland Park psychiatrist who is is on staff at Michael Reese and Highland Park hospitals, says psychology is behind the Whomania.

"I went to the 20th anniversary convention last year with my son and purchased a painting of the Doctor," Greendale said. "Soon I was discovering that patients would identify with the picture. They would acknowledge it and use it to free-associate. They would talk about what the Doctor meant to them."

Adolescents and Ph.D.s alike recognized their sci-fi hero, leading Greendale to muse about the phenomenon. Eventually, the doctor wrote a paper on the subject, theorizing that the program deals with some common psychological needs.

"People get a vicarious experience of seeing their emotional needs acted out in fantasy," Greendale said.

Examples that he mentions include the fact that the Doctor never dies, he merely regenerates (into a new doctor, which is why six actors have played the Doctor). And the Doctor's companions come and go while maintaining a continuity and cohesiveness, Greendale said. "People who have problems with loss and abandonment find this reassuring," he said.

But he had to revise his paper recently when a program showed the death of a young companion and ended on an emotional note. "There are some exceptions," Greendale said.

Greendale also points out that the Doctor is a messianic figure. "He always appears out of nowhere at a time of crisis, intervenes and leaves," Greendale said. "That's very satisfying."

And the cult phenomenon isn't lost on the psychiatrist.

"There's a fraternal bonding between 'Doctor Who' fans," Greendale said. "You can talk to a fan you've never met before and within 30 seconds you're old friends. It's like a family, and it's important for people to establish a sense of identity and bonding." Greendale will discuss his theory with a panel during the convention. Panel members will include Nathan-Turner and Jon Pertwee, the third actor to play the Doctor. Greendale will summarize his paper and each panelist will have five to 10 minutes to respond.

And that's just some of the serious business and sci-fi mania that await "Doctor Who" fans at TARDIS 21. Tickets to the event are $75 for three days and $65 for two, if there are any ducats left. "Doctor Who" fans find it a small price to pay for the chance to mingle with their omnipotent hero, the nameless Time Lord, the master of the TARDIS.