Sci-fi hit was born in another world 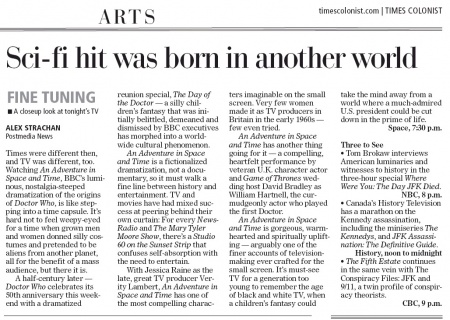 Times were different then, and TV was different, too. Watching An Adventure in Space and Time, BBC's luminous, nostalgia-steeped dramatization of the origins of Doctor Who, is like stepping into a time capsule. It's hard not to feel weepy-eyed for a time when grown men and women donned silly costumes and pretended to be aliens from another planet, all for the benefit of a mass audience, but there it is.

A half-century later — Doctor Who celebrates its 50th anniversary this weekend with a dramatized reunion special, The Day of the Doctor— a silly children's fantasy that was initially belittled, demeaned and dismissed by BBC executives has morphed into a worldwide cultural phenomenon.

An Adventure in Space and Time is a fictionalized dramatization, not a documentary, so it must walk a fine line between history and entertainment. TV and movies have had mixed success at peering behind their own curtain: For every NewsRadio and The Mary Tyler Moore Show, there's a Studio 60 on the Sunset Strip that confuses self-absorption with the need to entertain.

With Jessica Raine as the late, great TV producer Verity Lambert, An Adventure in Space and Time has one of the most compelling characters imaginable on the small screen. Very few women made it as TV producers in Britain in the early 1960s — few even tried.

An Adventure in Space and Time has another thing going for it — a compelling, heartfelt performance by veteran U.K. character actor and Game of Thrones wedding host David Bradley as William Hartnell, the curmudgeonly actor who played the first Doctor.

An Adventure in Space and Time is gorgeous, warmhearted and spiritually uplifting— arguably one of the finer accounts of television-making ever crafted for the small screen. It's must-see TV for a generation too young to remember the age of black and white TV, when a children's fantasy could take the mind away from a world where a much-admired U.S. president could be cut down in the prime of life.