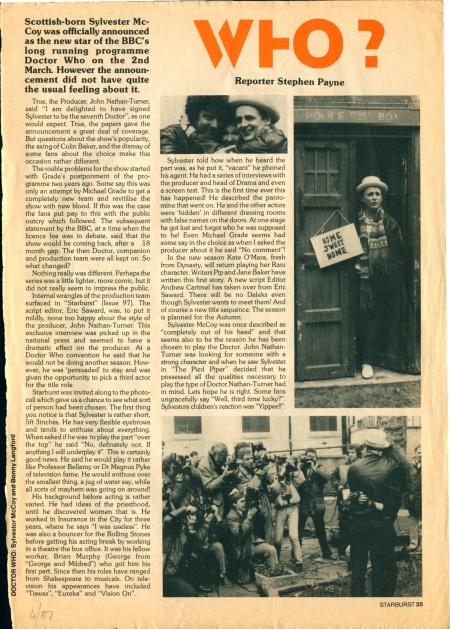 Scottish-born Sylvester McCoy was officially announced as the new star of the BBC's long running programme Doctor Who on the 2nd March. However the announcement did not have quite the usual feeling about it.

True, the Producer, John Nathan-Turner, said "I am delighted to have signed Sylvester to be the seventh Doctor", as one would expect. True, the papers gave the announcement a great deal of coverage. But questions about the show's popularity, the axing of Colin Baker, and the dismay of some fans about the choice make this occasion rather different.

The visible problems for the show started with Grade's postponment of the programme two years ago. Some say this was only an attempt by Michael Grade to get a completely new team and revitilise the show with new blood. If this was the case the fans put pay to this with the public outcry which followed. The subsequent statement by the BBC, at a time when the licence fee was in debate, said that the show would be coming back, after a 18 month gap. The then Doctor, companion and production team were all kept on. So what changed?

Nothing really was different. Perhaps the series was a little lighter, more comic, but it did not really seem to impress the public.

Internal wrangles of the production team surfaced in "Starburst" (Issue 97). The script editor, Eric Saward, was, to put it mildly, none too happy about the style of the producer, John Nathan-Turner. This exclusive interview was picked up in the national press and seemed to have a dramatic effect on the producer. At a Doctor Who convention he said that he would not be doing another season. However, he was 'persuaded' to stay and was given the opportunity to pick a third actor for the title role.

Starburst was invited along to the photo-call which gave us a chance to see what sort of person had been chosen. The first thing you notice is that Sylvester is rather short, 5ft 3inches. He has very flesible eyebrows and tends to enthuse about everything. When asked if he was to play the part "over the top" he said "No, definately not. If anything I will underplay it". This is certainly good news. He said he would play it rather like Professor Bellamy or Dr Magnus Pyke of television fame. He would enthuse over the smallest thing, a jug of water say, while all sorts of mayhem was going on around!

His background before acting is rather varied. He had ideas of the priesthood, until he discovered women that is. He worked in Insurance in the City for three years, where he says "I was useless". He was also a bouncer for the Rolling Stones before getting his acting break by working in a theatre the box office. It was his fellow worker, Brian Murphy (George from "George and Mildred") who got him his first part. Since then his roles have ranged from Shakespeare to musicals. On television his appearances have included "Tiswas", "Eureka" and "Vision On".

Sylvester told how when he heard the part was, as he put it, "vacant" he phoned his agent. He had a series of interviews with the producer and head of Drama and even a screen test. This is the first time ever this has happened! He described the pantomine that went on. He and the other actors were 'hidden' in different dressing rooms with false names on the doors. At one stage he got lost and forgot who he was supposed to be! Even Michael Grade seems had some say in the choice as when I asked the producer about it he said "No comment"!

In the new season Kate O'Mara, fresh from Dynasty, will return playing her Rani character. Writers Pip and Jane Baker have written this first story. A new script Editor Andrew Cartmel has taken over from Eric Saward. There will be no Daleks even though Sylvester wants to meet them! And of course a new title sequence. The season is planned for the Autumn.

Sylvester McCoy was once described as "completely out of his head" and that seems also to be the reason he has been chosen to play the Doctor. John Nathan-Turner was looking for someone with a strong character and when he saw Sylvester in "The Pied Piper" decided that he possessed all the qualities necessary to play the type of Doctor Nathan-Turner had in mind. Lets hope he is right. Some fans ungracefully say "Well, third time lucky?". Sylvestors children's reaction was "Yippee!!".