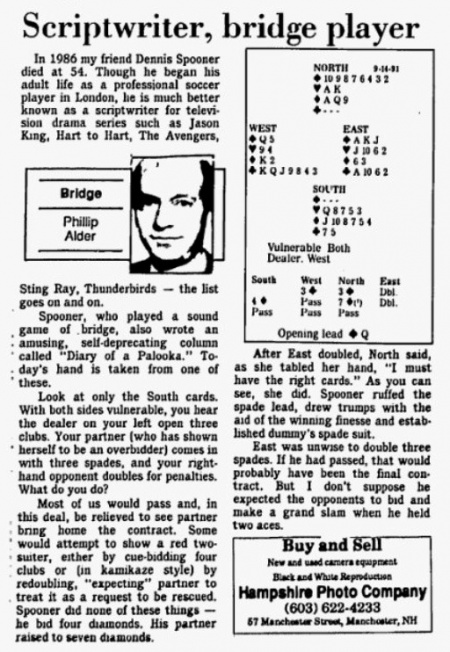 In 1986 my friend Dennis Spooner died at 54. Though he began his adult life as a professional soccer player in London, he is much better known as a scriptwriter for television drama series such as Jason King, Hart to Hart, The Avengers, Sting Ray, Thunderbirds — the list goes on and on.

Spooner, who played a sound game of bridge, also wrote an amusing, sell-deprecating column called "Diary of a Palooka." Today's hand is taken from one of these.

Look at only the South cards. With both sides vulnerable, you bear the dealer on your left open three clubs. Your partner (who has shown herself to be an overbidder) comes in with three spades, and your right-hand opponent doubles for penalties. What do you do?

Most of us would pass and, in this deal, be relieved to see partner bring home the contract. Some would attempt to show a red two-suiter, either by cue-bidding four clubs or (in kamikaze style) by redoubling, "expecting" partner to treat it as a request to be rescued. Spooner did none of these things —he bid four diamonds. His partner raised to seven diamonds.,

After East doubled, North said, as she tabled her band, "I must have the right cards." As you can see, she did. Spooner ruffed the spade lead, drew trumps with the aid of the winning finesse and established dummy's spade suit.

East was unwise to double three spades. If he had passed, that would probably have been the final contract. But 1 don't suppose he expected the opponents to bid and make a grand slam when he held two aces.