Seventh Life of a Time Lord 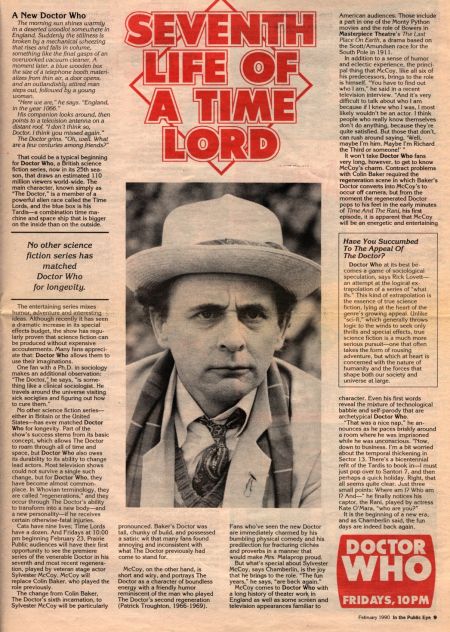 A New Doctor Who

The morning sun shines warmly in a deserted woodlot somewhere in England. Suddenly the stillness is broken by a mechanical wheezing that rises and falls in volume, something like the final gasps of an overworked vacuum cleaner. A moment later, a blue wooden box the size of a telephone booth materializes from thin air, a door opens, and an outlandishly attired man steps out, followed by a young woman.

His companion looks around, then points to a television antenna on a distant roof "I don't think so, Doctor. I think you missed again." The Doctor grins. "Oh, well. What are a few centuries among friends?"

That could be a typical beginning for Doctor Who, a British science fiction series. now in its 25th season, that draws an estimated 110 million viewers world-wide. The main character, known simply as "The Doctor," is a member of a powerful alien race called the Time Lords, and the blue box is his Tardis—a combination time machine and space ship that is bigger on the inside than on the outside.

The entertaining series mixes humor, adventure and interesting ideas. Although recently it has seen a dramatic increase in its special effects budget, the show has regularly proven that science fiction can be produced without expensive accouterments. Many fans appreciate that: Doctor Who allows them to use their imaginations.

One fan with a Ph.D. in sociology makes an additional observation: "The Doctor:: he says, "is something like a clinical sociologist. He travels around the universe visiting sick societies and figuring out how to cure them."

No other science fiction series—either in Britain or the United States—has ever matched Doctor Who for longevity. Part of the show's success stems from its basic concept, which allows The Doctor to roam through all of time and space, but Doctor Who also owes its durability to its ability to change lead actors. Most television shows could not survive a single such change, but for Doctor Who, they have become almost commonplace. In Whovian terminology, they are called "regenerations," and they occur through The Doctor's ability to transform into a new body—and a new personality—if he receives certain otherwise-fatal injuries.

Cats have nine lives; Time Lords have a dozen. And Fridays at 10:00 pm beginning February 23, Prairie Public audiences will have their first opportunity to see the premiere series of the venerable Doctor in his seventh and most recent regeneration, played by veteran stage actor Sylvester McCoy. McCoy will replace Colin Baker, who played the role previously.

The change from Colin Baker, The Doctor's sixth incarnation, to Sylvester McCoy will be particularly pronounced. Baker's Doctor was tall, chunky of build, and possessed a satiric wit that many fans found annoying and inconsistent with what The Doctor previously had come to stand for.

McCoy, on the other hand, is short and wiry, and portrays The Doctor as a character of boundless energy with a friendly humor reminiscent of the man who played The Doctor's second regeneration (Patrick Troughton, 1966-1969). Fans who've seen the new Doctor are immediately charmed by his bumbling physical comedy and his predilection for fracturing clichés and proverbs in a manner that would make Mrs. Malaprop proud.

But what's special about Sylvester McCoy, says Chamberlin, is the joy that he brings to the role. "The fun years," he says, "are back again."

McCoy comes to Doctor Who with a long history of theater work in England as well as some screen and television appearances familiar to American audiences. Those include a part in one of the Monty Python movies and the role of Bowers in Masterpiece Theatre's The Last Place On Earth, a drama based on the Scott/Amundsen race for the South Pole in 1911.

In addition to a sense of humor and eclectic experience, the principal thing that McCoy, like all six of his predecessors, brings to the role is himself. "You have to find out who I am," he said in a recent television interview. "And it's very difficult to talk about who I am because if I knew who I was, l most likely wouldn't be an actor. I think people who really know themselves don't do anything, because they're quite satisfied, But those that don't, can rush around saying, 'Well, maybe I'm him. Maybe I'm Richard the Third or someone!' "

It won't take Doctor Who fans very long, however, to get to know McCoy's charm. Contract problems with Colin Baker required the regeneration scene in which Baker's Doctor converts into McCoy's to occur off camera, but from the moment the regenerated Doctor pops to his feet in the early minutes of Time And The Rani, his first episode, it is apparent that McCoy will be an energetic and entertaining character. Even his first words reveal the mixture of technological babble and self-parody that are archetypical Doctor Who.

"That was a nice nap," he announces as he paces briskly around a room where he was imprisoned while he was unconscious. "Now, down to business. I'm a bit worried about the temporal thickening in Sector 13. There's a bicentennial refit of the Tardis to book in--I must just pop over to Santori 7, and then perhaps a quick holiday. Right, that all seems quite clear. Just three small points: Where am I? Who am I? And—" he finally notices his captor, the Rani, played by actress Kate O'Mara, "who are you?"

It is the beginning of a new era, and as Chamberlin said, the fun days are indeed back again.

FRIDAYS, 10PM --- Have You Succumbed To The Appeal Of The Doctor?

Doctor Who at its best becomes a game of sociological speculation, says Rick Lovett—an attempt at the logical extrapolation of a series of "what ifs." This kind of extrapolation is the essence of true science fiction, lying at the heart of the genre's growing appeal. Unlike "sci-fi," which generally throws logic to the winds to seek only thrills and special effects, true science fiction is a much more serious pursuit—one that often takes the form of rousing adventure, but which at heart is concerned with the nature of humanity and the forces that shape both our society and universe at large.