Sexterminate Him! Dr Who's Too Blue 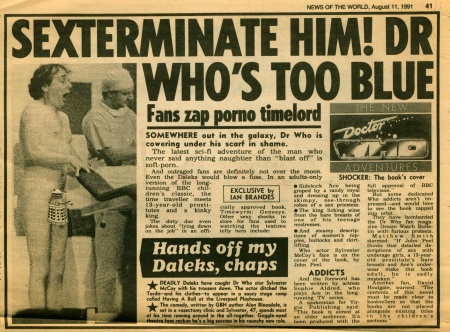 SOMEWHERE out in the galaxy, Dr Who is cowering under his scarf in shame.

The latest sci-fi adventure of the man who never said anything naughtier than "blast off' is soft-porn.

And outraged fans are definitely not over the moon. Even the Daleks would blow a fuse. In an adults-only version of the long-running BBC children's classic, the time traveller meets 13-year-old prostitutes and a kinky king.

The dirty doc even jokes about "lying down on the job" in an officially approved book, Timewyrm: Genesys. Other sexy shocks in store for fans used to watching the teatime telly hero include:

• Sidekick Ace being groped by a randy royal and dressing up in the skimpy, see-through robes of a sex priestess.

• The king licking wine from the bare breasts of one of his teenage mistresses.

• And steamy descriptions of women's nipples, buttocks and skirt-lifting.

Who actor McCoy's face is on the cover of the book, John Peel.

And the foreword has been written by actress Sophie Aldred, who plays Ace in the long-running TV series.

A spokesman for Virgin Publishing said: "This book is aimed at an older audience. It's been produced with the full approval of BBC televison."

But some dedicated Who addicts aren't impressed—and would love to see the book zapped into orbit.

They have bombarded the Dr Who fan magazine Dream Watch Bulletin with furious protests.

Another fan, David Houlgate, warned: "The contents of this novel must be made clear to booksellers so that the books are not placed alongside existing titles in the children's sections."

Hands off my Daleks, chaps

DEADLY Daleks have caught Dr Who star Sylvester McCoy with his trousers down. The actor ditched the Tardis—and his clothes—to appear in a saucy stage romp called Having A Ball at the Liverpool Playhouse.

The comedy, written by GBH author Alan Bleasdale, is set in a vasectomy clinic and Sylvester, 47, spends most of his time running around in the all-together. Goggle-eyed theatre fans reckon he's a big success in his raunchy new role.