She's back in the Whoniverse 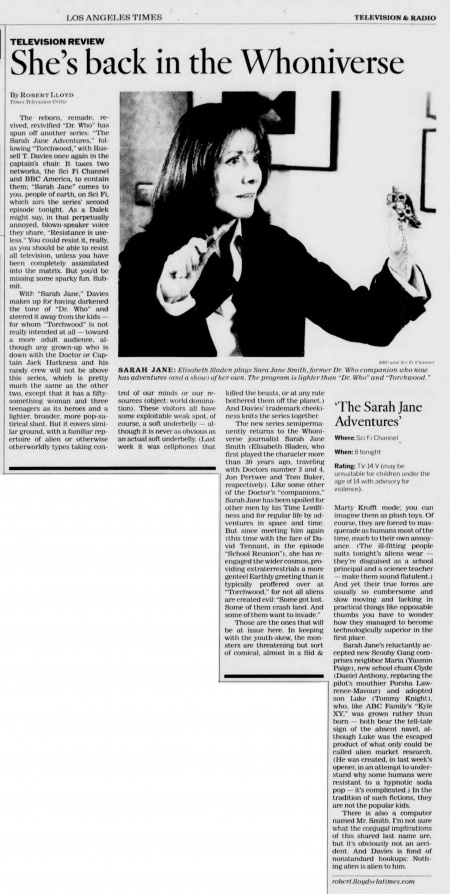 The reborn, remade, revived, revivified "Dr. Who" has spun off another series: "The Sarah Jane Adventures." following "Torchwood," with Russell T. Davies once again in the captain's chair. It taxes two networks, the Sci Fi Channel and BBC America, to contain them; "Sarah Jane" comes to you, people of earth, on Sci Fi, which airs the series' second episode tonight. As a Dalek might say, in that perpetually annoyed, blown-speaker voice they share. "Resistance is useless." You could resist it, really, as you should be able to resist all television, unless you have been completely assimilated into the matrix. But you'd be missing some sparky fun. Submit.

With "Sarah Jane," Davies makes up for having darkened the tone of "Dr. Who" and steered it away from the kids —for whom "Torchwood" is not really intended at all — toward a more adult audience, although any grown-up who is down with the Doctor or Captain Jack Harkness and his randy crew will not be above this series, which is pretty much the same as the other two, except that it has a fifty-something woman and three teenagers as its heroes and a lighter, broader. more pop-satirical slant. But it covers similar ground, with a familiar repertoire of alien or otherwise otherworldly types taking control of our minds or our resources (object: world domination). These visitors all have some exploitable weak spot, of course, a soft underbelly — although it is never as obvious as an actual soft underbelly. (Last week it was cellphones that killed the beasts, or at any rate bothered them off the planet.) And Davies' trademark cheekiness knits the series together.

The new series semipermanently returns to the Whoniverse Journalist Sarah Jane Smith (Elisabeth Sladen, who first played the character more than 30 years ago, traveling with Doctors number 3 and 4, Jon Pertwee and Tom Baker, respectively). Like some other of the Doctor's "companions," Sarah Jane has been spoiled for other men by his Time Lordliness and for regular life by adventures in space and time. But since meeting him again (this time with the face of David Tennant, in the episode "School Reunion"), she has re-engaged the wider cosmos, providing extraterrestrials a more genteel Earthly greeting than is typically proffered over at "Torchwood," for not all aliens are created evil: Some got lost. Some of them crash land. And some of them want to invade."

Those are the ones that will be at issue here. In keeping with the youth-skew, the monsters are threatening but sort of comical, almost in a Sid & Marty Krofft mode; you can imagine them as plush toys. Of course, they are forced to masquerade as humans most of the time, much to their own annoyance. (The ill-fitting people suits tonight's aliens wear —they're disguised as a school principal and a science teacher — make them sound flatulent.) And yet their true forms are usually so cumbersome and slow moving and lacking in practical things like opposable thumbs you have to wonder how they managed to become technologically superior in the first place.

Sarah Jane's reluctantly accepted new Scooby Gang comprises neighbor Maria (Yasmin Paige), new school chum Clyde (Daniel Anthony, replacing the pilot's mouthier Porsha Lawrence-Mavour) and adopted son Luke (Tommy Knight), who, like ABC Family's "Kyle XY," was grown rather than born — both bear the tell-tale sign of the absent navel, although Luke was the escaped product of what only could be called alien market research. (He was created, in last week's opener, in an attempt to understand why some humans were resistant to a hypnotic soda pop — it's complicated.) In the tradition of such fictions, they are not the popular kids.

There is also a computer named Mr. Smith. I'm not sure what the conjugal implications of this shared last name are, but it's obviously not an accident. And Davies is fond of nonstandard hookups: Nothing alien is alien to him.

Rating: TV-14 V (may be unsuitable for children under the age of 14 with advisory for violence).

Caption: SARAH JANE: Elisabeth Sladen plays Sara Jane Smith, former Dr. Who companion who now has adventures (and a show) of her own. The program is lighter than "Dr. Who" and "Torchwood."