She must face her demons 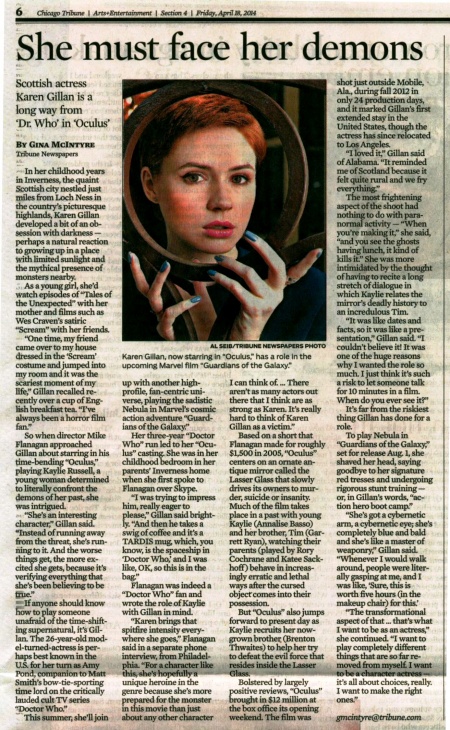 Scottish actress Karen Gillan is a long way from 'Dr. Who' in 'Oculus'

In her childhood years in Inverness, the quaint Scottish city nestled just miles from Loch Ness in the country's picturesque highlands, Karen Gillan developed a bit of an obsession with darkness — perhaps a natural reaction to growing up in a place with limited sunlight and the mythical presence of monsters nearby.

As a young girl, she'd watch episodes of "Tales of the Unexpected" with her mother and films such as Wes Craven's satiric "Scream" with her friends.

"One time, my friend came over to my house dressed in the 'Scream' costume and jumped into my room and it was the scariest moment of my life," Gillan recalled recently over a cup of English breakfast tea. "I've always been a horror film fan."

So when director Mike Flanagan approached Gillan about starring in his time-bending "Oculus," playing Kaylie Russell, a young woman determined to literally confront the demons of her past, she was intrigued.

"She's an interesting character," Gillan said. "Instead of running away from the threat, she's running to it. And the worse things get, the more excited she gets, because it's verifying everything that she's been believing to be true."

If anyone should know how to play someone unafraid of the time-shifting supernatural, it's Gillan. The 26-year-old model-turned-actress is perhaps best known in the U.S. for her turn as Amy Pond, companion to Matt Smith's bow-tie-sporting time lord on the critically lauded cult TV series "Doctor Who."

This summer, she'll join up with another high-profile, fan-centric universe, playing the sadistic Nebula in Marvel's cosmic action adventure "Guardians of the Galaxy."

Her three-year "Doctor Who" run led to her "Oculus" casting. She was in her childhood bedroom in her parents' Inverness home when she first spoke to Flanagan over Skype.

"I was trying to impress him, really eager to please," Gillan said brightly. "And then he takes a swig of coffee and it's a TARDIS mug, which, you know, is the spaceship in 'Doctor Who,' and I was like, OK, so this is in the bag."

Flanagan was indeed a "Doctor Who" fan and wrote the role of Kaylie with Gillan in mind.

"Karen brings that spitfire intensity everywhere she goes," Flanagan said in a separate phone interview, from Philadelphia. "For a character like this, she's hopefully a unique heroine in the genre because she's more prepared for the monster in this movie than just about any other character I can think of. ... There aren't as many actors out there that I think are as strong as Karen. It's really hard to think of Karen Gillan as a victim."

Based on a short that Flanagan made for roughly $1,500 in 2005, "Oculus" centers on an ornate antique mirror called the Lasser Glass that slowly drives its owners to murder, suicide or insanity. Much of the film takes place in a past with young Kaylie (Annalise Basso) and her brother, Tim (Garrett Ryan), watching their parents (played by Rory Cochrane and Katee Sackhoff) behave in increasingly erratic and lethal ways after the cursed object comes into their possession.

But "Oculus" also jumps forward to present day as Kaylie recruits her now-grown brother (Brenton Thwaites) to help her try to defeat the evil force that resides inside the Lasser Glass.

Bolstered by largely positive reviews, "Oculus" brought in $12 million at the box office its opening weekend. The film was shot just outside Mobile, Ala., during fall 2012 in only 24 production days, and it marked Gillan's first extended stay in the United States, though the actress has since relocated to Los Angeles.

"I loved it," Gillan said of Alabama. "It reminded me of Scotland because it felt quite rural and we fry everything."

The most frightening aspect of the shoot had nothing to do with paranormal activity — "When you're making it," she said, "and you see the ghosts having lunch, it kind of kills it." She was more intimidated by the thought of having to recite a long stretch of dialogue in which Kaylie relates the mirror's deadly history to an incredulous Tim.

"It was like dates and facts, so it was like a presentation," Gillan said. "I couldn't believe it! It was one of the huge reasons why I wanted the role so much. I just think it's such a risk to let someone talk for 10 minutes in a film. When do you ever see it?"

It's far from the riskiest thing Gillan has done for a role.

To play Nebula in "Guardians of the Galaxy," set for release Aug. 1, she shaved her head, saying goodbye to her signature red tresses and undergoing rigorous stunt training — or, in Gillan's words, "action hero boot camp."

"She's got a cybernetic arm, a cybernetic eye; she's completely blue and bald and she's like a master of weaponry," Gillan said. "Whenever I would walk around, people were literally gasping at me, and I was like, 'Sure, this is worth five hours (in the makeup chair) for this.'

"The transformational aspect of that ... that's what I want to be as an actress," she continued. "I want to play completely different things that are so far removed from myself. I want to be a character actress — it's all about choices, really. I want to make the right ones."