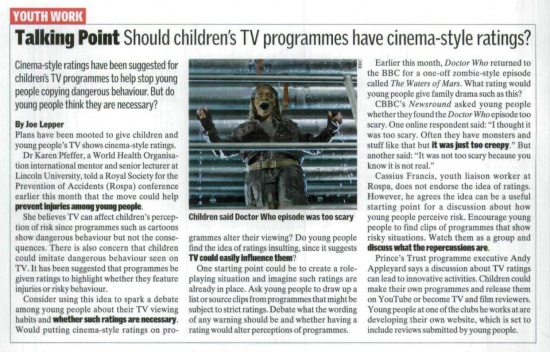 Plans have been mooted to give children and young people's TV shows cinema-style ratings.

Dr Karen Pfeffer, a World Health Organisation international mentor and senior lecturer at Lincoln University, told a Royal Society for the Prevention of Accidents (Rospa) conference earlier this month that the move could help prevent injuries among young people.

She believes TV can affect children's perception of risk since programmes such as cartoons show dangerous behaviour but not the consequences. There is also concern that children could imitate dangerous behaviour seen on TV. It has been suggested that programmes be given ratings to highlight whether they feature injuries or risky behaviour.

Consider using this idea to spark a debate among young people about their TV viewing habits and whether such ratings are necessary Would putting cinema-style ratings on programmes alter their viewing? Do young people find the idea of ratings insulting, since it suggests TV could easily influence them?

One starting point could he to create a role-playing situation and imagine such ratings are already in place. Ask young people to draw up a list or source clips from programmes that might be subject to strict ratings. Debate what the wording of any warning should be and whether having a rating would alter perceptions of programmes.

Earlier this month, Doctor Who returned to the BBC for a one-off zombie-style episode called The Waters of Mars. What rating would young people give family drama such as this?

CBBC's Newsround asked young people whether they found the Doctor Who episode too scary. One online respondent said: "I thought it was too scary. Often they have monsters and stuff like that but it was just too creepy." But another said: "It was not too scary because you know it is not real."

Cassius Francis, youth liaison worker at Rospa, does not endorse the idea of ratings. However, he agrees the idea can be a useful starting point for a discussion about how young people perceive risk. Encourage young people to find clips of programmes that show risky situations. Watch them as a group and discuss what the repercussions are.

Prince's Trust programme executive Andy Appleyard says a discussion about TV ratings can lead to innovative activities. Children could make their own programmes and release them on YouTube or become TV and film reviewers. Young people at one of the clubs he works at are developing their own website, which is set to include reviews submitted by young people.

Caption: Children said Doctor Who episode was too scary