Show Builds on 26-Year Journey Through Time and Space 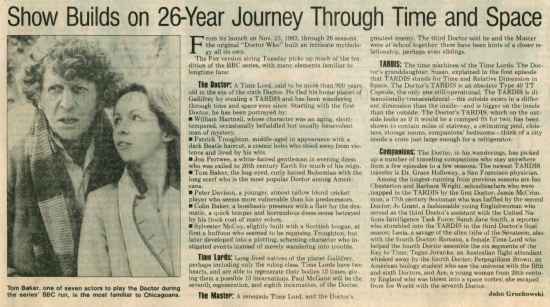 From its-launch on Nov. 23, 1963, through 26 seasons, the original "Doctor Who" built an intricate mythology all its own. The Fox version airing Tuesday picks up much of the tradition of the BBC series, with many elements familiar to longtime fans:

The Doctor: A Time Lord, said to be more than 900 years old in the era of the sixth Doctor. He fled his home planet of Gallifrey by stealing a TARDIS and has been wandering through time and space ever since. Starting with the first Doctor, he has been portrayed by:

• William Hartnell, whose character was an aging, short-tempered, occasionally befuddled but usually benevolent man of mystery.

• Patrick Troughton, middle-aged in appearance with a dark Beetle haircut, a cosmic hobo who shied away from violence and lived by his wits.

• Jon Pertwee, a white-haired gentleman in evening dress who was exiled to 20th century Earth for much of his reign.

• Tom Baker, the bug-eyed, curly haired Bohemian with the long scarf who is the most popular Doctor among Americans.

• Colin Baker, a bombastic presence with a flair for the dramatic, a quick temper and horrendous dress sense betrayed by his frock coat of many colors.

• Sylvester McCoy, slightly built with a Scottish brogue, at first a buffoon who seemed to be reprising Troughton, but later developed into a plotting, scheming character who instigated events instead of merely wandering into trouble.

Time Lords: Long-lived natives of the planet Gallifrey, perhaps including only the ruling class. Time Lords have two hearts, and are able to regenerate their bodies 12 times, giving them a possible 13 incarnations. Paul McGann will be the seventh, regeneration, and eighth incarnation, of the Doctor.

The Master: A renegade Time Lord, and the Doctor's greatest enemy. The third Doctor said he and the Master were at school together; there have been hints of a closer relationship, perhaps even siblings.

TARDIS: The time machines of the Time Lords. The Doctor's granddaughter, Susan, explained in the first episode that TARDIS stands for Time and Relative Dimension in Space. The Doctor's TARDIS is an obsolete Type 40 TT Capsule, the only one still operational. The TARDIS is dimensionally transcendental—the outside exists in a different dimension than the inside—and is bigger on the inside than the outside. The Doctor's TARDIS, which on the outside looks as if it would be a cramped fit for two, has been shown to contain miles of stairway, a swimming pool, cloisters, storage rooms, companions' bedrooms—think of a city inside a crate just large enough for a refrigerator.

Companions: The Doctor, in his wanderings, has picked up a number of traveling companions who stay anywhere from a few episodes to a few seasons. The newest TARDIS traveler is Dr. Grace Holloway, a San Francisco physician.

Among the longest-running from previous seasons are Ian Chesterton and Barbara Wright, schoolteachers who were trapped in the TARDIS by the first Doctor; Jamie McCrimmon, a 17th century Scotsman who was baffled by the second Doctor; Jo Grant, a fashionable young Englishwoman who served as the third Doctor's assistant with the United Nations Intelligence Task Force; Sarah Jane Smith, a reporter who stumbled into the TARDIS in the third Doctor's final season; Leela, a savage of the alien tribe of the Sevateem, also with the fourth Doctor; Romana, a female Time Lord who helped the fourth Doctor assemble the six segments of the Key to Time; Tegan Jovanka, an Australian flight attendant whisked away by the fourth Doctor; Perpugilliam Brown, an American biology student who saw the universe with the fifth and sixth Doctors, and Ace, a young woman from 20th century England who was blown into a space vortex; she escaped from Ice World with the seventh Doctor.

Caption: Tom Baker, one of seven actors to play the Doctor during the series' BBC run, is the most familiar to Chicagoans.