Sidekick whose time has come 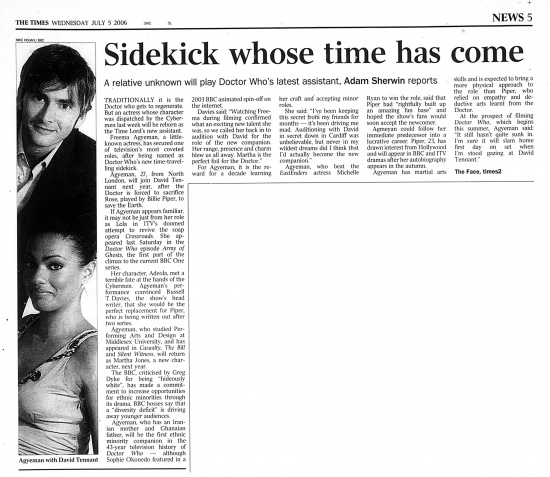 TRADITIONALLY it is the Doctor who gets to regenerate. But an actress whose character was dispatched by the Cyber-men last week will be reborn as the Time Lord's new assistant. Freema Agyeman, a little-known actress, has secured one of television's most coveted roles, after being named as Doctor Who's new time-travelling sidekick.

Agyeman, 27, from North London, will join David Tennant next year, after the Doctor is forced to sacrifice Rose, played by Billie Piper, to save the Earth.

If Agyeman appears familiar, it may not be just from her role as Lola in ITV's doomed attempt to revive the soap opera Crossroads. She appeared last Saturday in the Doctor Who episode Army of Ghosts, the first part of the climax to the current BBC One series.

Her character, Adeola, met a terrible fate at the hands of the Cybermen. Agyeman's performance convinced Russell T. Davies, the show's head writer, that she would be the perfect replacement for Piper, who is being written out after two series.

Agyeman, who studied Performing Arts and Design at Middlesex University, and has appeared in Casualty, The Bill and Silent Witness, will return as Martha Jones, a new character, next year.

The BBC, criticised by Greg Dyke for being "hideously white", has made a commitment to increase opportunities for ethnic minorities through its drama. BBC bosses say that a "diversity deficit" is driving away younger audiences. Agyeman, who has an Iranian mother and Ghanaian father, will be the first ethnic minority companion in the 43-year television history of Doctor Who — although Sophie Okonedo featured in a 2003 BBC animated spin-off on the internet.

Davies said: "Watching Freema during filming confirmed what an exciting new talent she was, so we called her back in to audition with David for the role of the new companion. Her range, presence and charm blew us all away. Martha is the perfect foil for the Doctor." For Agyeman, it is the reward for a decade learning her craft and. accepting minor roles.

She said: "Is, been keeping this secret from my friends for months — it's been driving me mad. Auditioning with David in secret down in Cardiff was unbelievable, but never in my wildest dreams did I think that I'd actually become the new companion."

Agyeman, who beat the EastEnders actress Michelle Ryan to win the role, said that Piper had "rightfully built up an amazing fan base" and hoped the show's fans would soon accept the newcomer. Agmeyan could follow her immediate predecessor into a lucrative career. Piper, 23, has drawn interest from Hollywood and will appear in BBC and ITV dramas after her autobiography appears in the autumn. Agyeman has martial arts skills and is expected to bring a more physical approach to the role than Piper, who relied on empathy and deductive arts learnt from the Doctor.

At the prospect of filming Doctor Who, which begins this summer, Agyeman said: "It still hasn't quite sunk in. I'm sure it will slam home first day on set when I'm stood gazing at David Tennant.