So eerie-my search for the silent 'Dr Who' 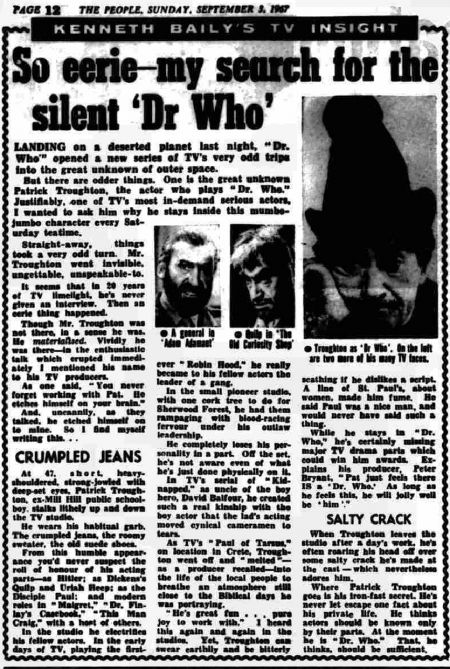 LANDING on a deserted planet last night, "Dr. Who — opened a new series of TV's very odd trips into the great unknown of outer space.

But there are odder things. One is the great unknown Patrick Troughton, the actor who plays "Dr. Who." Justifiably, one of TV's most in-demand serious actors, I wanted to ask him why he stays inside this mumbo- Jumbo character every Saturday teatime.

It seems that in 20 years of TV limelight, he's never given an interview. Then an eerie thing happened.

Though Mr. Troughton was not there, in a sense he was. He materiallsed. Vividly he was there—in the enthusiastic talk which erupted immediately I mentioned his sates to his TV producers.

As one said, You never forget working with Pat. He etches himself on your brain."

And, uncannily, as they talked, he etched himself on to mine. So I find myself writing this...

He wean his habitual garb. The crumpled jeans, the roomy sweater. the old suede shoes.

From this humble appearance you'd never suspect the roll of honour of his acting parts—as Hitler; as Dickens's Dunn and Uriah Heep; as the Disciple Paul: and modern roles In "Maigret," "Dr. Finlay's Casebook," "'This Man Craig," with a host of others.

In the small pioneer studio, with one cork tree to do for Sherwood Forest, he had them ramming with blood-racing fervour under his outlaw leadership.

He completely loses his personality in a part. Off the set, he's not aware even of what he's just done physically on it.

In TV's serial of "Kidnapped," as uncle of the boy hero, David Balfour, he crested such a real kinship with the boy actor that the lad's acting moved cynical cameramen to tears.

As TV's Paul of Tarsus." on location In Crete, Troughton went off and "melted" as a producer recalled—into the life of the local people to breathe an atmosphere still close to the Biblical days he was portraying.

"He's great fun. pure joy to work with." I heard this again and again in the studios. Yet, Troughton can swear earthily and be bitterly scathing if he dislikes a mint. A line of St. Paul's, about women, made him fume. He said Paul was a nice man, and would never have said such a thing.

While he stays in "Dr. Who," he's certainly missing major TV drama parts which could win him awards. Explains his producer, Peter Bryant, "Pat just feels there IS a 'Dr. Who.' As long as he feels this, he will jolly well be him'."

When Troughton leaves the studio after a day's work, he's often roaring his head off over some salty crack he's made at the cast which nevertheless adores him.

Where Patrick Troughton goes is his iron-fast secret. He's never let escape one tact about his private life. He thinks actors should be known only by their parts. At the moment he is "Dr. Who." That, he thinks, should be sufficient.