Solidarity with Dr Who 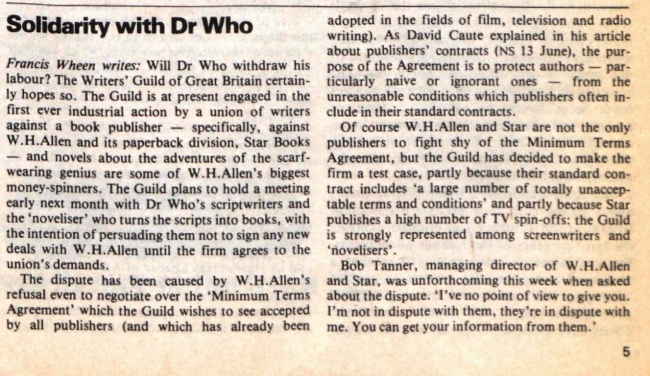 Francis Wheen writes: Will Dr Who withdraw his labour? The Writers' Guild of Great Britain certainly hopes so. The Guild is at present engaged in the first ever industrial action by a union of writers against a book publisher — specifically, against W.H.Allen and its paperback division, Star Books — and novels about the adventures of the scarf-wearing genius are some of W.H.Allen's biggest money-spinners. The Guild plans to hold a meeting early next month with Dr Who's scriptwriters and the 'novelises' who turns the scripts into books, with the intention of persuading them not to sign any new deals with W.H.Allen until the firm agrees to the union's demands.

The dispute has been caused by W.H.Allen's refusal even to negotiate over the 'Minimum Terms Agreement' which the Guild wishes to see accepted by all publishers land which has already been adopted in the fields of film, television and radio writing). As David Caute explained in his article about publishers' contracts INS 13 June), the purpose of the Agreement is to protect authors — particularly naive or ignorant ones — from the unreasonable conditions which publishers often include in their standard contracts.

Of course W.H.Allen and Star are not the only publishers to fight shy of the Minimum Terms Agreement, but the Guild has decided to make the firm a test case, partly because their standard contract includes 'a large number of totally unacceptable terms and conditions' and partly because Star publishes a high number of TV spin-offs: the Guild is strongly represented among screenwriters and 'novelisers'.

Bob Tanner, managing director of W.H.Allen and Star, was unforthcoming this week when asked about the dispute. 'I've no point of view to give you. I'm not in dispute with them, they're in dispute with me. You can get your information from them.'