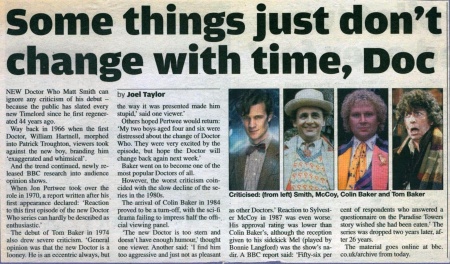 NEW Doctor Who Matt Smith can ignore any criticism of his debut - because the public has slated every new Timelord since he first regenerated 44 years ago.

Way back in 1966 when the first Doctor, William Hartnell, morphed into Patrick Troughton, viewers took against the new boy, branding him 'exaggerated and whimsical'.

When Jon Pertwee took over the role in 1970, a report written after his first appearance declared: 'Reaction to this first episode of the new Doctor Who series can hardly be described as enthusiastic.' The debut of Tom Baker in 1974 also drew severe criticism. 'General opinion was that the new Doctor is a looney. He is an eccentric always, but the way it was presented made him stupid,' said one viewer.' Others hoped Pertwee would return: 'My two boys aged four and six were distressed about the change of Doctor Who. They were very excited by the episode, but hope the Doctor will change back again next week.' Baker went on to become one of the most popular Doctors of all.

However, the worst criticism coincided with the slow decline of the series in the 1980s.

The arrival of Colin Baker in 1984 proved to be a turn-off, with the sci-fi drama failing to impress half the official viewing panel.

'The new Doctor is too stern and doesn't have enough humour,' thought one viewer. Another said: 'I find him too aggressive and just not as pleasant as other Doctors.' Reaction to Sylvester McCoy in 1987 was even worse. His approval rating was lower than Colin Baker's, although the reception given to his sidekick Mel (played by Bonnie Langford) was the show's nadir.

A BBC report said: 'Fifty-six per cent of respondents who answered a questionnaire on the Paradise Towers story wished she had been eaten.' The series was dropped two years later, after 26 years.

The material goes online at bbc.co.uk/archive from today.