Someone fetch me a doctor, my brain hurts 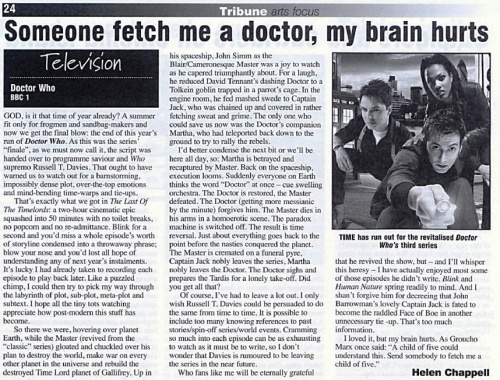 GOD, is it that time of year already? A summer fit only for frogmen and sandbag-makers and now we get the final blow: the end of this year's run of Doctor Who. As this was the series' "finale, as we must now call it, the script was handed over to programme saviour and Who supremo Russell T. Davies. That ought to have warned us to watch out for a barnstorming, impossibly dense plot, over-the-top emotions and mind-bending time-warps and tie-ups.

That's exactly what we got in The Last Of The Timelords: a two-hour cinematic epic squashed into 50 minutes with no toilet breaks, no popcorn and no re-admittance. Blink for a second and you'd miss a whole episode's worth of storyline condensed into a throwaway phrase; blow your nose and you'd lost all hope of understanding any of next year's instalments. Its lucky I had already taken to recording each episode to play back later. Like a puzzled chimp, I could then try to pick my way through the labyrinth of plot, sub-plot, meta-plot and subtext. I hope all the tiny tots watching appreciate how post-modern this stuff has become.

So there we were, hovering over planet Earth, while the Master (revived from the "classic" series) gloated and chuckled over his plan to destroy the world, make war on every other planet in the universe and rebuild the destroyed Time Lord planet of Gallifrey. Up in his spaceship. John Simm as the Blair/Camronesque Master was a joy to watch as he capered triumphantly about. For a laugh, he reduced David Tenant's dashing Doctor to a Tolkein goblin trapped in a parrot's cage. In the engine room, he fed mashed swede to Captain Jack, who was chained up and covered in rather fetching sweat and grime. The only one who could save us now was the Doctor's companion Martha, who had teleported back down to the ground to try to rally the rebels.

I'd better condense the next bit or well be here all day, so: Martha is betrayed and recaptured by Master. Back on the spaceship, execution looms. Suddenly everyone on Earth thinks the word "Doctor" at once — cue swelling orchestra. The Doctor is restored, the Master defeated. The Doctor (getting more messianic by the minute) forgives him. The Master dies in his arms in a homoerotic scene. The paradox machine is switched off. The result is time reversal. Just about everything goes back to the point before the nasties conquered the planet. The Master is cremated on a funeral pyre, Captain Jack nobly leaves the series, Martha nobly leaves the Doctor. The Doctor sighs and prepares the Tardis for a lonely take-off. Did you get all that?

Of course, I've had to leave a lot out. I only wish Russell T. Davies could be persuaded to do the same from time to time. It is possible to include too many knowing references to past stories/spin-off series/world events. Cramming so much into each episode can be as exhausting to watch as it must be to write, so I don't wonder that Davies is rumoured to be leaving the series in the near future.

Who fans like me will be eternally grateful that he revived the show, but — and I'll whisper this heresy — I have actually enjoyed most some of those episodes he didn't write. Blink and Human Nature spring readily to mind. And I shan't forgive him for decreeing that John Barrowman's lovely Captain Jack is fated to become the raddled Face of Boe in another unnecessary tie -up. That's too much information.

I loved it, but my brain hurts. As Groucho Marx once said: "A child of five could understand this. Send somebody to fetch me a child of five."

Caption: TIME has run out for the revitalised Doctor Who's third series