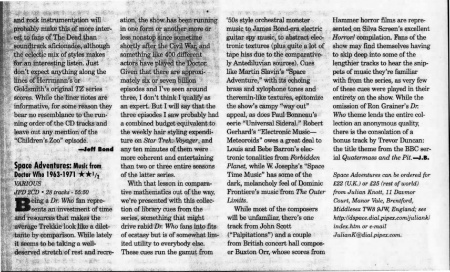 Being a Dr. Who fan represents an investment of time and resources that makes the average Trekkie look like a dilettante by comparison. While lately it seems to be taking a well-deserved stretch of rest and recreation, the show has been running in one form or another more or less nonstop since sometime shortly after the Civil War, and something like 400 different actors have played the Doctor. Given that there are approximately six or seven billion episodes and I've seen around three, I don't think I qualify as an expert. But I will say that the three episodes I saw probably had a combined budget equivalent to the weekly hair styling expenditure on Star Trek: Voyager, and any ten minutes of them were more coherent and entertaining than two or three entire seasons of the latter series.

With that lesson in comparative mathematics out of the way, we're presented with this collection of library cues from the series, something that might drive rabid Dr. Who fans into fits of ecstasy but is of somewhat limited utility to everybody else. These cues run the gamut from '50s style orchestral monster music to James Bond-era electric guitar spy music, to abstract electronic textures (plus quite a lot of tape hiss due to the comparatively Antediluvian sources). Cues like Martin Slavin's "Space Adventure," with its echoing brass and xylophone tones and theremin-like textures, epitomize the show's campy "way out" appeal, as does Paul Bonneau's eerie "Universal Sideral." Robert Gerhard's "Electronic Music—Meteoroids" owes a great deal to Louis and Bebe Barron's electronic tonalities from Forbidden Planet, while W. Josephs's "Space Time Music" has some of the dark, melancholy feel of Dominic Frontiere's music from The Outer Limits.

While most of the composers will be unfamiliar, there's one track from John Scott ("Palpitations") and a couple from British concert hall composer Buxton Orr, whose scores from

Hammer horror films are represented on Silva Screen's excellent Horror! compilation. Fans of the show may find themselves having to skip deep into some of the lengthier tracks to hear the snippets of music they're familiar with from the series, as very few of these cues were played in their entirety on the show. While the omission of Ron Grainer's Dr. Who theme lends the entire collection an anonymous quality, there is the consolation of a bonus track by Trevor Duncan: the title theme from the BBC serial Quatermass and the Pit. — J.B.