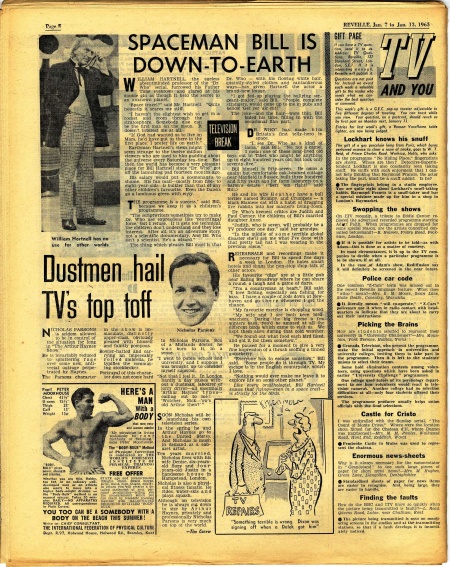 WILLIAM HARTNELL, the ageless absentminded professor of the "Dr. Who" serial, furrowed his Father Time eyebrows and glared at his double gin as though it held the secret to an unknown planet.

"I haven't the slightest wish to get in a rocket and zoom through the stratosphere. Somebody else can be the first man on the moon. It doesn't interest me at all.

"If God had wanted us to live on Mars, he'd have put us there in the first place. I prefer life on earth."

Earthman Hartnell's views might seem strange to the twelve million viewers who are used to him gadding about the universe every Saturday tea-time. But then the world has become a very pleasant place for Bill Hartnell since "Dr. Who" got off the launching pad fourteen months ago.

His salary would put a cosmonaut's to shame. His fan mail—mostly from five- to eight-year-olds—is bulkier than that of any other children's favourite. Even the Daleks go a luminous green with envy.

"THE programme is a success," said Bill, because we keep it as a children's programme.

"The scriptwriters sometimes try to make Dr. Who use expressions like 'centrifugal force,' but I refuse. If it gets too technical, the children don't understand and they lose interest. After all, it's an adventure story, not a scientific documentary. And Dr. Who isn't a scientist. He's a wizard."

The thing which pleases Bill most is that Dr. Who — with his flowing white hair, qaintly-styled clothes and cantankerous ways—has given Hartnell the actor a brand-new image.

"I got fed-up playing the bullying sergeant-major," said Bill. "People, complete strangers, would come up to me in pubs and yellow 'Get yer 'air cut!"

The joke--and the hair—wore thin. Bill bided his time, filling In with the occasional film part.

"DR. WHO" has made him Britain's first telly-hero in space.

"I see Dr. Who as a kind of lama," said Bill: "No, not a camel. I mean one of those long-lived old boys out in Tibet who might be anything up to eight hundred years old, but look only seventy-five."

Bill himself is fifty-seven. He owns a quaint but comfortable oak-beamed cottage rear Mayfield in Sussex, built three hundred and fifty years ago for farm labourers on a Aaron's estate. ("Serf 'em right!" said Bill.)

He and his wife Heather have a bull terrier named Stumpy, and Crumpets — a Mack Siamese cat with a habit of dragging live rabbits into her master's living-room.

Dr. Who's keenest critics are Judith and Paul Carney, the children of Bill's married daughter Anne.

"Judith, who is seven, will probably be a TV producer one day," said her grandpa.

"In the middle of some terrible global disaster she'll ask me what I've done with that pretty tall hat I was wearing in the previous scene."

REHEARSALS and recordings make it necessary for Bill to spend five days a week in London. He hates smart hotels and shuns the non-stop shop-talk of other actors.

His favourite "digs" are at a little pub near Ealing Broadway where he can share a round, a laugh and a game of darts.

"I'm a countryman at heart," Bill said. "I love fishing, especially sea fishing for bass. I have a couple of rods down at Newhaven and go there whenever I get the chance.

"My favourite exercise is chopping wood.

"My wife and I are both keen bird-watchers. During the big freeze a few winters back, you'd be amazed at all the different birds which came to visit us. We kept them alive during that cold weather.

"We found out what food each bird liked, and got it for them somehow."

He paused for a moment to give a very fine impression of a thrush scoffing a tinned gooseberry.

"Everyone has to escape somehow," Bill said. "Some people do it through TV. My escape is in the English countryside, which I love.

"Nothing would ever make me leave it to explore life on some other planet."

Like every ornithologist, Bill Hartnell knows that flying—even in a space craft— is strictly for the birds.

Comic: "Something terrible is wrong. Dixon was signing off when a Dalek got him."