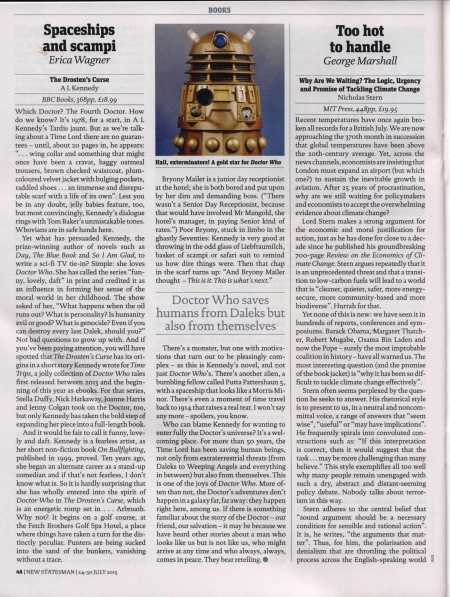 Which Doctor? The Fourth Doctor. How do we know? It's 1978, for a start, in A L Kennedy's Tardis jaunt. But as we're talking about a Time Lord there are no guarantees — until, about 20 pages in, he appears: ". . wing collar and something that might once have been a cravat, baggy oatmeal trousers, brown checked waistcoat, plum-coloured velvet jacket with bulging pockets, raddled shoes ... an immense and disreputable scarf with a life of its own". Lest you be in any doubt, jelly babies feature, too, but most convincingly, Kennedy's dialogue rings with Tom Baker's unmistakable tones. Whovians are in safe hands here.

Yet what has persuaded Kennedy, the prize-winning author of novels such as Day, The Blue Book and So I Am Glad, to write a sci-fi TV tie-in? Simple: she loves Doctor Who. She has called the series "funny, lovely, daft" in print and credited it as an influence in forming her sense of the moral world in her childhood. The show asked of her, "What happens when the oil runs out? What is personality? Is humanity evil or good? What is genocide? Even if you can destroy every last Dalek, should you?" Not bad questions to grow up with. And if you've been paying attention, you will have spotted that The Drosten's Curse has its origins in a short story Kennedy wrote for Time Trips, a jolly collection of Doctor Who tales first released between 2013 and the beginning of this year as ebooks. For that series, Stella Duffy, Nick Harkaway, Joanne Harris and Jenny Colgan took on the Doctor, too, but only Kennedy has taken the bold step of expanding her piece into a full-length book.

And it would be fair to call it funny, lovely and daft. Kennedy is a fearless artist, as her short non-fiction book On Bullfighting, published in 1999, proved. Ten years ago, she began an alternate career as a stand-up comedian and if that's not fearless, I don't know what is. So it is hardly surprising that she has wholly entered into the spirit of Doctor Who in The Drosten's Curse, which is an energetic romp set in ... Arbroath. Why not? It begins on a golf course, at the Fetch Brothers Golf Spa Hotel, a place where things have taken a turn for the distinctly peculiar. Punters are being sucked into the sand of the bunkers, vanishing without a trace.

Bryony Mailer is a junior day receptionist at the hotel; she is both bored and put upon by her dim and demanding boss. ("There wasn't a Senior Day Receptionist, because that would have involved Mr Mangold, the hotel's manager, in paying Senior kind of rates.") Poor Bryony, stuck in limbo in the ghastly Seventies: Kennedy is very good at throwing in the odd glass of Liebfraumilch, basket of scampi or safari suit to remind us how dire things were. Then that chap in the scarf turns up: "And Bryony Mailer thought — This is it. This is what's next."

There's a monster, but one with motivations that turn out to be pleasingly complex — as this is Kennedy's novel, and not just Doctor Who's. There's another alien, a bumbling fellow called Putta Pattershaun 5, with a spaceship that looks like a Morris Minor. There's even a moment of time travel back to 1914 that raises a real tear. I won't say any more — spoilers, you know.

Who can blame Kennedy for wanting to enter fully the Doctor's universe? It's a welcoming place. For more than 5o years, the Time Lord has been saving human beings, not only from extraterrestrial threats (from Daleks to Weeping Angels and everything in between) but also from themselves. This is one of the joys of Doctor Who. More often than not, the Doctor's adventures don't happen in a galaxy far, far away: they happen right here, among us. If there is something familiar about the story of the Doctor — our friend, our salvation — it may be because we have heard other stories about a man who looks like us but is not like us, who might arrive at any time and who always, always, comes in peace. They bear retelling.

Caption: Hail, exterminators! A gold star for Doctor Who