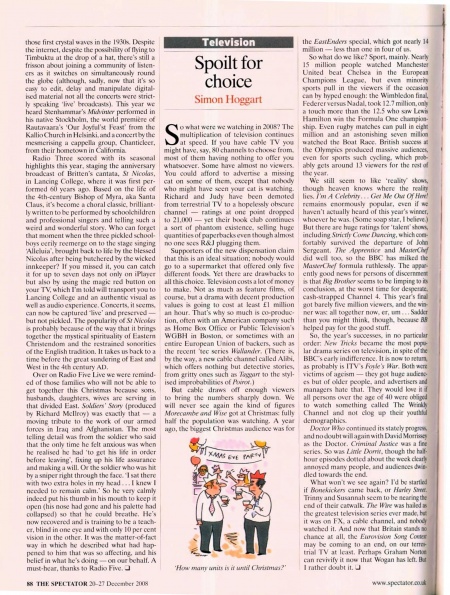 So what were we watching in 2008? The multiplication of television continues at speed. If you have cable TV you might have, say, 80 channels to choose from, most of them having nothing to offer you whatsoever. Some have almost no viewers.

You could afford to advertise a missing cat on some of them, except that nobody who might have seen your cat is watching.

Richard and Judy have been demoted from terrestrial TV to a hopelessly obscure channel -- ratings at one point dropped to 21,000 -- yet their book club continues a sort of phantom existence, selling huge quantities of paperbacks even though almost no one sees R&J plugging them.

Supporters of the new dispensation claim that this is an ideal situation; nobody would go to a supermarket that offered only five different foods. Yet there are drawbacks to all this choice. Television costs a lot of money to make. Not as much as feature films, of course, but a drama with decent production values is going to cost at least £1 million an hour. That's why so much is co-production, often with an American company such as Home Box Office or Public Television's WGBH in Boston, or sometimes with an entire European Union of backers, such as the recent 'tec series Wallander. (There is, by the way, a new cable channel called Alibi, which offers nothing but detective stories, from gritty ones such as Taggart to the stylised improbabilities of Poirot. ) But cable draws off enough viewers to bring the numbers sharply down. We will never see again the kind of figures Morecambe and Wise got at Christmas: fully half the population was watching. A year ago, the biggest Christmas audience was for the EastEnders special, which got nearly 14 million -- less than one in four of us.

So what do we like? Sport, mainly. Nearly 15 million people watched Manchester United beat Chelsea in the European Champions League, but even minority sports pull in the viewers if the occasion can by hyped enough: the Wimbledon final, Federer versus Nadal, took 12.7 million, only a touch more than the 12.5 who saw Lewis Hamilton win the Formula One championship. Even rugby matches can pull in eight million and an astonishing seven million watched the Boat Race. British success at the Olympics produced massive audiences, even for sports such cycling, which probably gets around 13 viewers for the rest of the year.

We still seem to like 'reality' shows, though heaven knows where the reality lies. I'm A Celebrity . . .Get Me Out Of Here! remains enormously popular, even if we haven't actually heard of this year's winner, whoever he was. (Some soap star, I believe. ) But there are huge ratings for 'talent' shows, including Strictly Come Dancing, which comfortably survived the departure of John Sergeant. The Apprentice and MasterChef did well too, so the BBC has milked the MasterChef formula ruthlessly. The apparently good news for persons of discernment is that Big Brother seems to be limping to its conclusion, at the worst time for desperate, cash-strapped Channel 4. This year's final got barely five million viewers, and the winner was: all together now, er, um . . . Sadder than you might think, though, because BB helped pay for the good stuff.

So, the year's successes, in no particular order: New Tricks became the most popular drama series on television, in spite of the BBC's early indifference. It is now to return, as probably is ITV's Foyle's War. Both were victims of ageism -- they got huge audiences but of older people, and advertisers and managers hate that. They would love it if all persons over the age of 40 were obliged to watch something called The Wrinkly Channel and not clog up their youthful demographics.

Doctor Who continued its stately progress, and no doubt will again with David Morrissey as the Doctor. Criminal Justice was a fine series. So was Little Dorrit, though the half-hour episodes dotted about the week clearly annoyed many people, and audiences dwindled towards the end.

What won't we see again? I'd be startled if Bonekickers came back, or Harley Street. Trinny and Susannah seem to be nearing the end of their catwalk. The Wire was hailed as the greatest television series ever made, but it was on FX, a cable channel, and nobody watched it. And now that Britain stands no chance at all, the Eurovision Song Contest may be coming to an end, on our terrestrial TV at least. Perhaps Graham Norton can revivify it now that Wogan has left. But I rather doubt it.